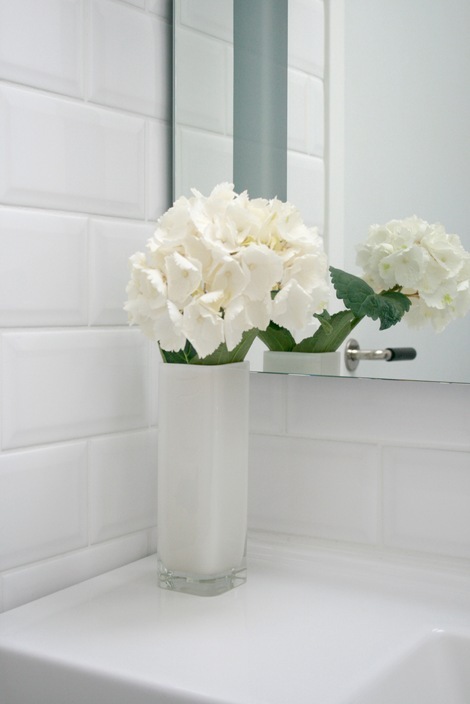 Yesterday I promised some more detailed photos of the bathroom and I usually keep my promises so here you go. 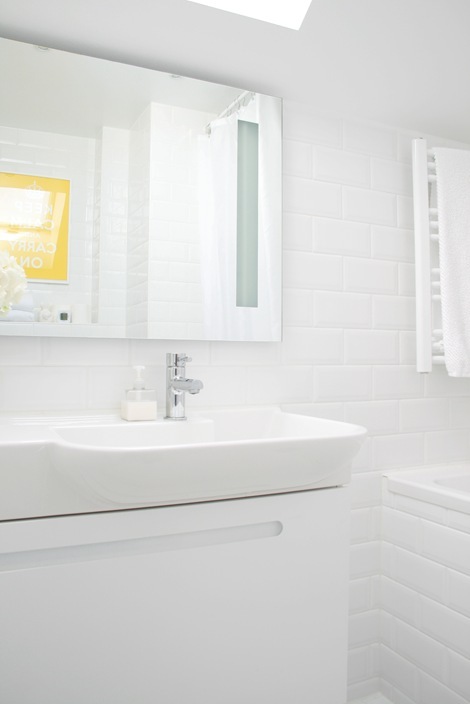 I know that some of these details on what fittings I got are probably only valid in Sweden but I’ll post them anyway because otherwise I’ll probably just end up linking in the comments. The sink and cabinet is Bianca by Svedbergs and the tap is Navona, also by Svedbergs. The reason for this choice of taps is that it was one of very few that had a matching set for tub and shower. Isn’t that odd? Wouldn’t you go for matching sets in your bathroom?

The mirror is Logic by Gustavsberg. I originally wanted those Hollywood lights surrounding the sink but with incandescent light bulbs being banned over here I settled for this mirror with built in lights. And I love it. 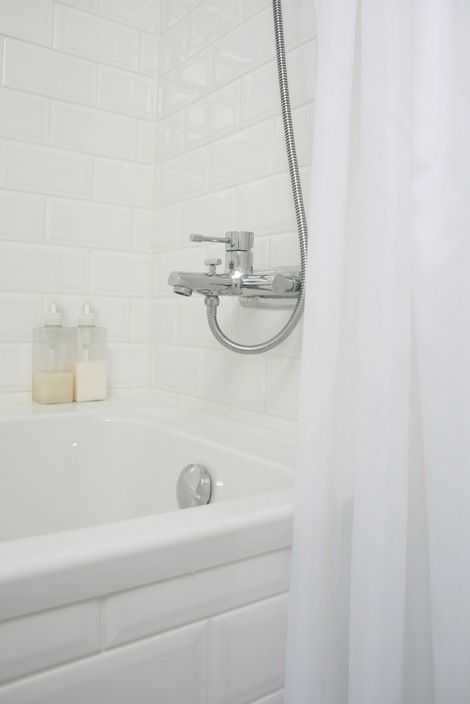 Here’s the matching shower/bath tap. The tub is Linjär by Svenska Badkar/Villeroy Boch. The reason for this particular tub is that it’s one of only about three regular tubs available with the short measurement of 150 cm and it’s the least ugly one.

The soap and shampoo bottles are from Muji. 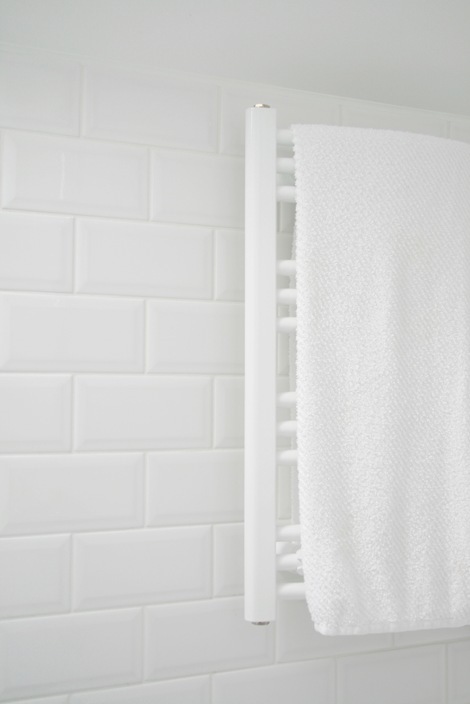 The heated towel rail Bas is also a Svedbergs product. The reason for this choice was that it is white and small enough to fit at the head end above the tub, below the sloping ceiling. 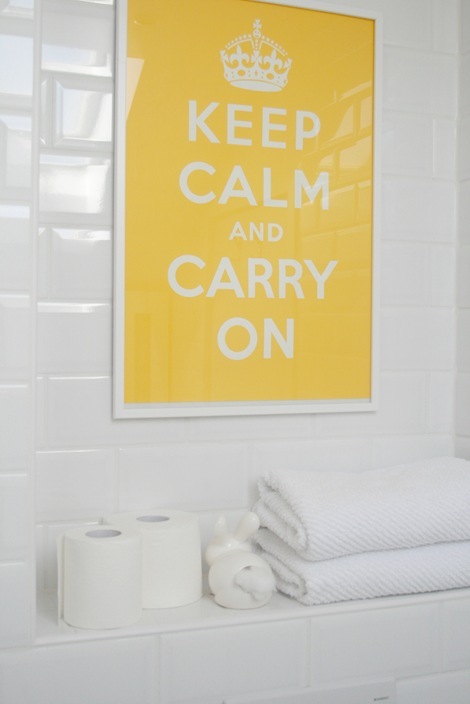 The subway tiles are called Biselado and the shiny white floor tiles are Arkitekt. I found both at Höganäs. I temporarily hung my Keep Calm poster in the nook above the toilet but I don’t know if it will stay there. 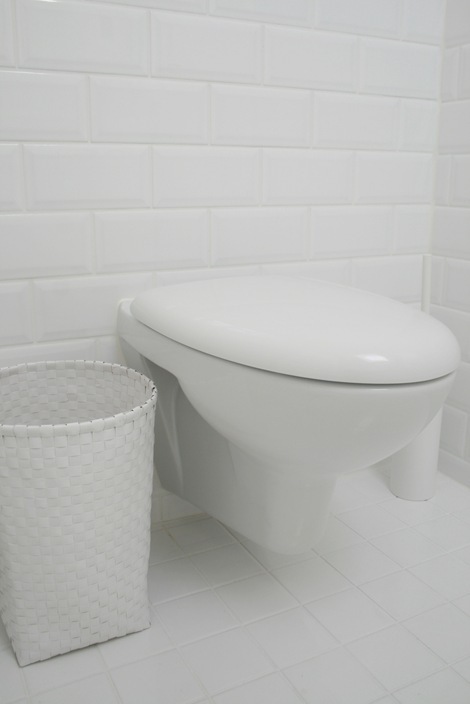 The toilet again is by Svedbergs and the built in flush-o-mobile thingy inside the tiled wall is a Geberit. This has got to be the most uncomfortable throne ever constructed. I regret not having tried it before ordering it but there you go. I prefer to do number 2 in the extra WC instead. Way too much information I know, but word of advice (which I got from a reader but didn’t listen to unfortunately), try before you buy!

The waste paper basket came from a local department store, Åhléns, I don’t think they have them any longer. The toilet brush is from IKEA.

There you go, the bathroom!

The Bathroom Before and After 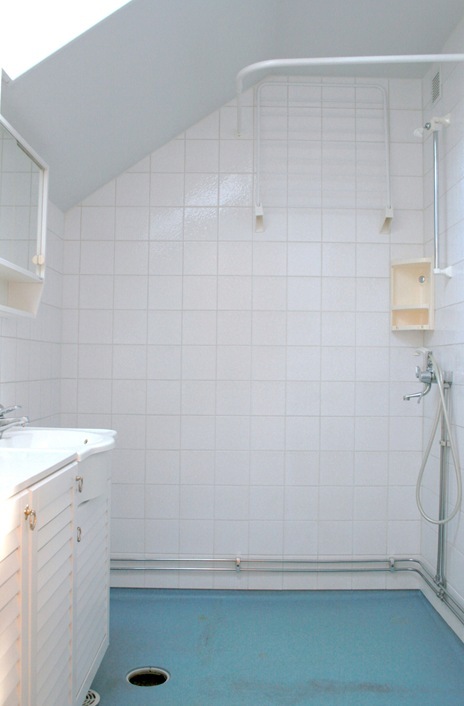 So, after that sneak peek of the bathroom yesterday I thought it’s about time I show you a before and after.

That’s the before above if you didn’t guess it already.

And drumroll! The after : 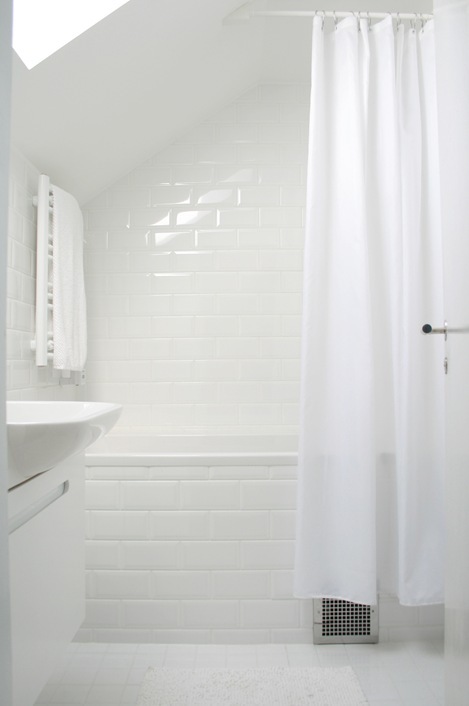 Ps. That shower curtain is actually just the lining which usually hangs in the tub. Still haven’t decided on a fabric for the outside. Will show you as soon as I’ve sewn it! 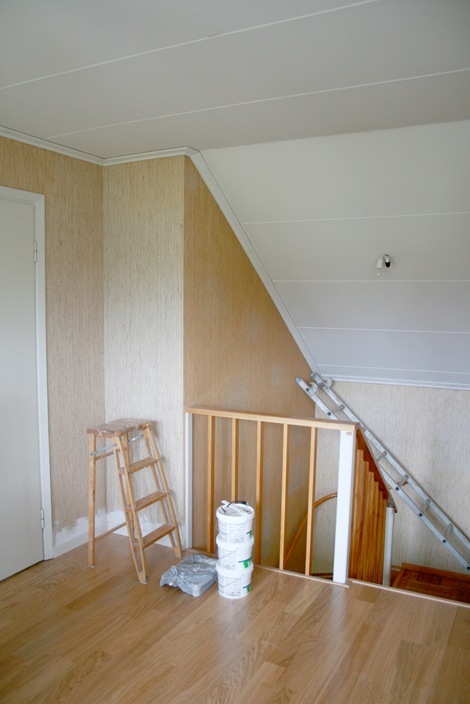 So my next big paint project is under way. It’s the upper hall/den that need a bit of a makeover. That sea grass was installed in the 70’s I believe and while I have nothing against the texture, the beige needs to go. And don’t worry, you CAN paint over it, I already started in the den section to the right of this photo and it takes three coats but looks perfectly fine!

As you can see I painted behind the base boards before they were put up after the floor was laid so there wouldn't be a dark shadow in between.

This photo isn’t telling the whole truth about this paint project actually. I already did the worst part which was to scrape, sand and spackle the molding at the top. It was peeling badly and it’s the kind of job I hate because it’s 1) messy and 2) boring. So glad that’s done. Now I can enjoy painting the ceiling and the walls. The trim, doors and windows also need painting but that’s my summer vacation project.

Oh, and I desperately need to find a nice ceiling light for that stairwell. I want something that’s not open underneath, so a globe shape or similar. I considered a le Klint but I’m a little bored with it because everyone who seems somewhat interested in design here in Sweden seems to have it. Any suggestions? I’m willing to splurge a little on this one.