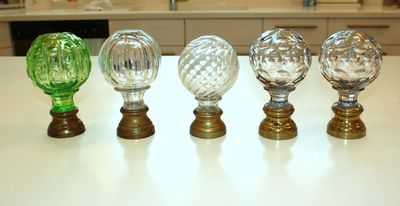 It's been a while since we brainstormed but here's a good one. I love these antique newel post toppers. They belong to my friend Carol.

She says: They are approximately 6" high and 3 1/2" at their widest point across. Oh and their kinda heavy too. They were on stair posts inside homes. 3 were found in the US and 2 in the Paris flea market (I couldn't resist the green one!). Right now they are just sitting in the living room bookshelves waiting for me to figure out what to do with them. OK,OK....they have been sitting there for 4 years now!

Actually I love them just the way they are as decorative objects but after four years on display here are some options.

They could be mounted to a board and used as a coathanger or jewelry hanger.

You could just bring them to the table and mix them in among candle sticks. I bet they'd reflect light in a cool way.

I could see one as a paperweight, mounted onto a round board for added stability.

Or they could be used as handles for large boxes.

How about as curtain finials and/or tie backs?

Mount as many as you like on a shelf with pedestals and use as a hat stand.

I know your family's quite outdoorsy so how about a deluxe climbing wall in the back yard? Actually, I think that's it, Carol!

So anyway, these are our suggestions. Any other ideas to share with Carol? She's all ears and so are we!

This will actually be our last Brainstorm. Ten is such a nice and even number, don't you think?! We've really enjoyed the ride and hope it's triggered that "what else could I use this for" in you. 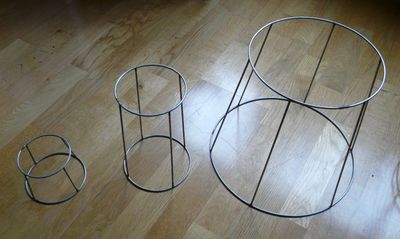 Brainstorm number 9 is coming to you live from the Sockholm suburbia.

A Swedish reader Anna sent them over. She works in a shop and these are actually supports on which lampshades get delivered on. As she can't bare putting then in the trash she's brought a whole bunch of them in all three sizes home ( so would I have!).

As soon as I saw these my brain started to itch to get to work but I did ask Martin and our loyal friends Sanna and Sebastian for their opinions too and here are our suggestions.

How about using the biggest one as a cake stand?

After the holidays Anna can use a few for storing her string lights.

By covering them in plastic they could be made into a kid's drum set.

A bit of cling film with a few holes poked for air circulation and Anna has herself some instant garden cloches.

Also in the garden they could be used as trellises.

Imagine serving sea food platters on them. What a feast!

Since Anna has quite a few she can connect them with metal wire and cover the structure in rice  paper and make a Noguchi inspired lamp.

We're past Halloween but next year Anna can scare her neighborhood at a new level.

By sewing a bag with drawstring for the largest frame it could be used for storage. Imagine a whole row of these on a shelf. Cute. if you ask me.

Speaking of cute, how about turning some into a set of play furniture by attaching little wooden tops?

Those are our ideas. Like I said, Anna has quite a few of these so more suggestions are welcome. Bring 'em on! 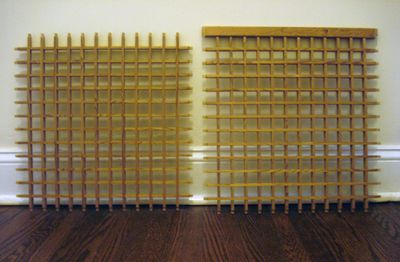 Ready? Brainstorm time! This time it's Samarra's waffles as she calls them. Here's her e-mail.

I live in NYC which is often a candy store when it comes to finding curbed items that other people don't want. Over the years, I've found sooo many things and I now try to control myself as space in our apartment is limited. On a recent walk with a friend in Park Slope, I spotted these items leaning up against a fence, waiting for the trash truck. I passed them up the first time, but on the way back, I gave in. Each grid is about 16" square and maybe .5" thick. There's also a single removable edge-piece for one side of one grid. I have no idea what this thing is or was. If you play with it enough, all the pieces are removable, as they're only slotted together with no glue or nails. What on earth could I do with this (aside from putting it back onto the curb!

Buckle up! Heeeeeere we go!

Samarra could cut the grids down in size and make one or several trivets.

Or use it as an egg stand.

After Martin came up with this idea my suspicion is that they may have actually been used in a radiator cover? No?

How about using one cut down in size as a trellis for a potted plant?

By adding the waffle grid to a box type structure and adding a bulb thingy it could be used as a light. On the floor or cut down in size on a window sill?

How about art? By pasting images at the back making them look individually framed at the front. Tiny objects could be displayed in some of the spaces.

Ah! Instant Mondrian. Some black spray paint and some painted canvas at the back...

Here's an idea we all (Sanna, Seb, Martin and myself) came up with different takes on, all to do with planting. a) Used on a tray inside with soil in the spaces to sew seeds on. b) Outdoors in the vegetable patch to keep seeds in check while they grow and allow for easy transferring to bigger pots or into the ground. c) Using the grid to stamp the soil in a grid pattern and then add one seed per square. d) Placing it on the soil, sow and use the grid as support for those puny early stems.

Shoe rack! Martin would like to point out that the shoes on display are Clark's desert boots. The bestest boot ever made and that he has worn them continously since he was nine. Not the same pair mind you.

And yes, I can't wait to start decorating for the Holidays and an Advent calendar is on my to do list (I AM aware that Wille's 15 and I'm forcing one on him this year. It's his duty as my son to eat the chocolate and shut up. He he...). By cutting the grid down to size there can be 24 little slots for mini gifts and a huge (Right, Samarra?!) 25th to be presented to Samarras baby boy on Christmas morning.

Samarra particularily requested suggestions brainstormed after some glasses of wine but looking back we seem to have been pretty sober... Any whacky (or other sensible) ideas for her? We are all ears!