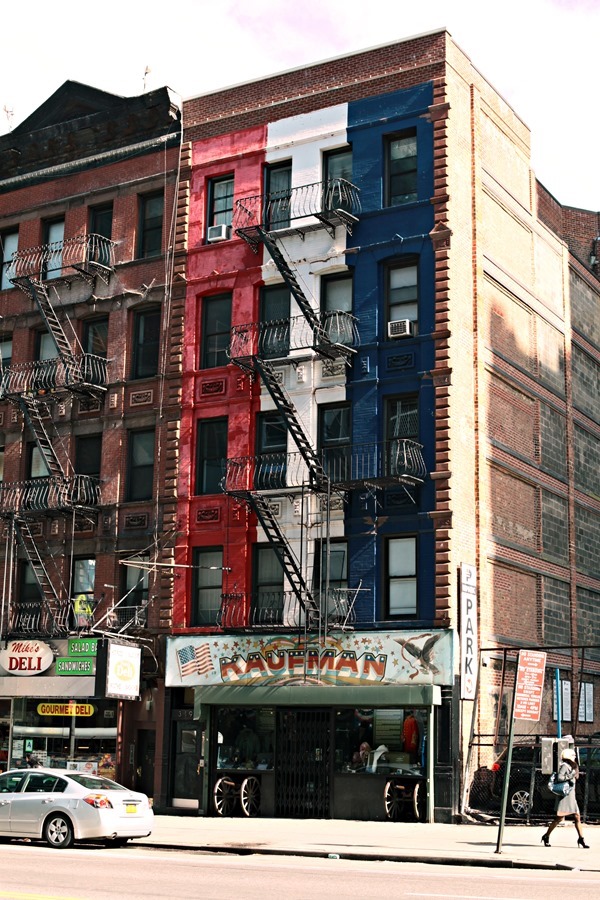 I’ve decided to split our New York shopping into two posts. Today I’ll show you what we got for Wille and tomorrow what I got. On our two previous trips when he was 14 and 16 Wille didn’t really have an interest in shopping, other than gadgets and New York souvenirs. This time around at 19 he wanted to hit the second hand and army/navy surplus stores + get a pair of sunglasses.

We started our surplus hunt out at Kaufman which turned out to be closed. Bummer. Then we went on to Galaxy. Also closed. Double bummer and we were worried that we wouldn’t find any stores in that category open the week after Easter. 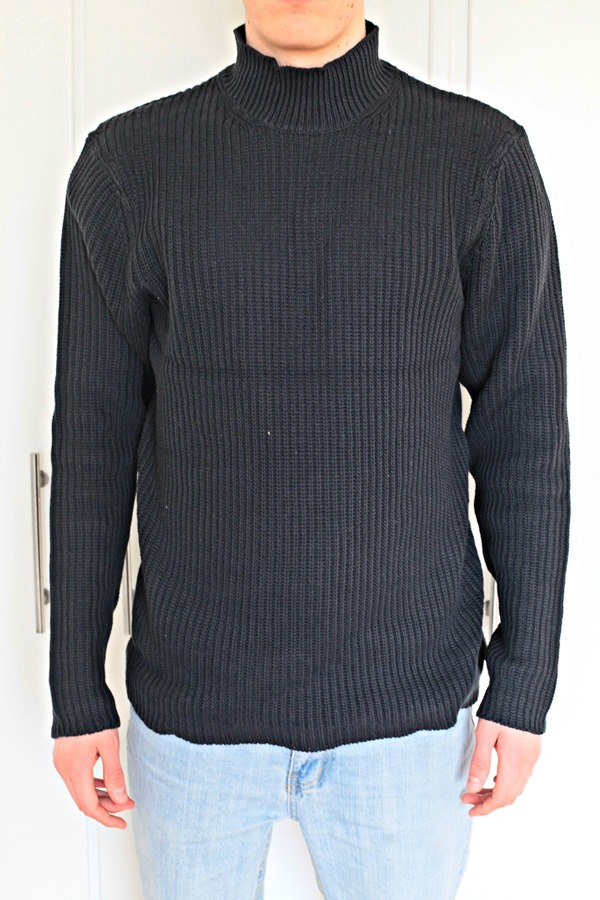 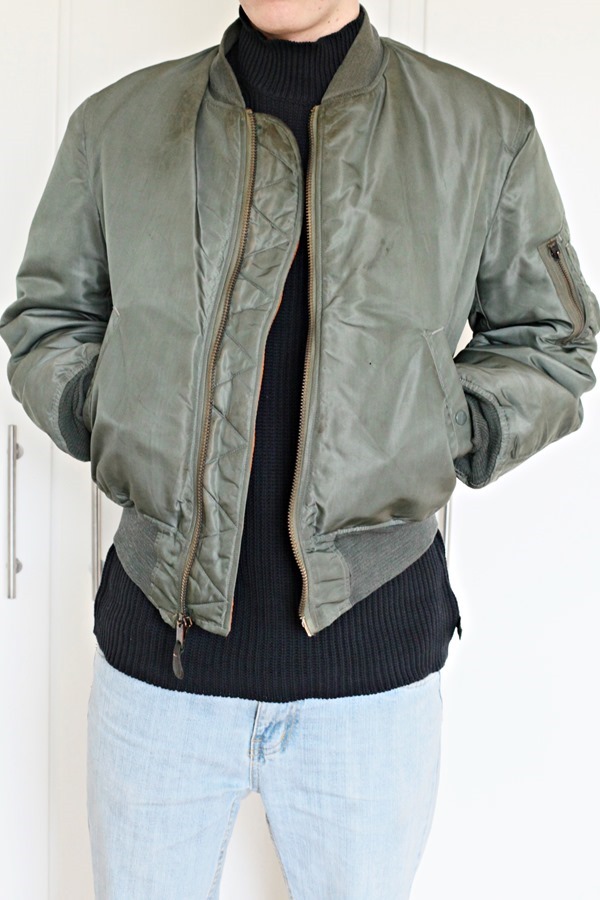 Our third stop was Uncle Sam’s and yay they were open! We rummaged around for a while and Wille decided on a nice warm sweater and a bomber jacket. 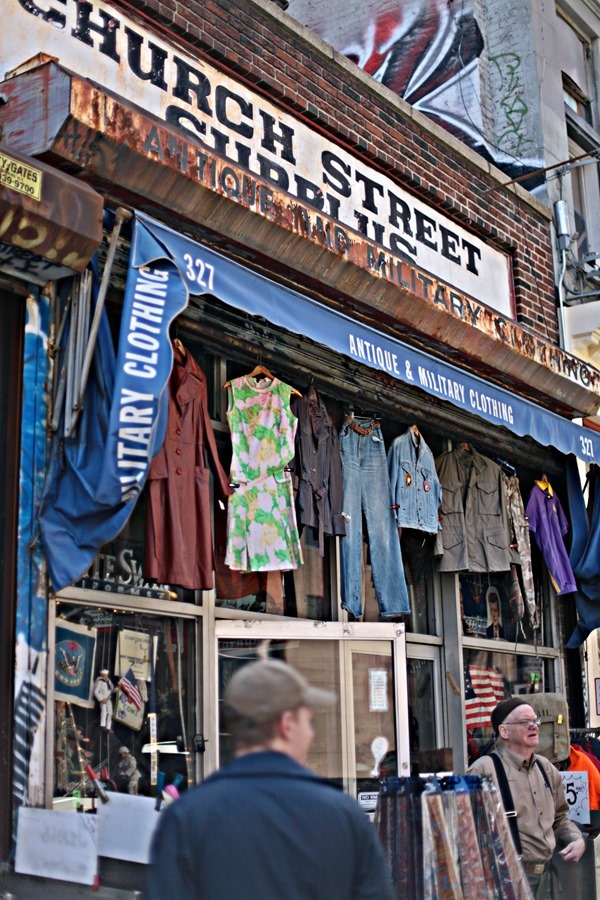 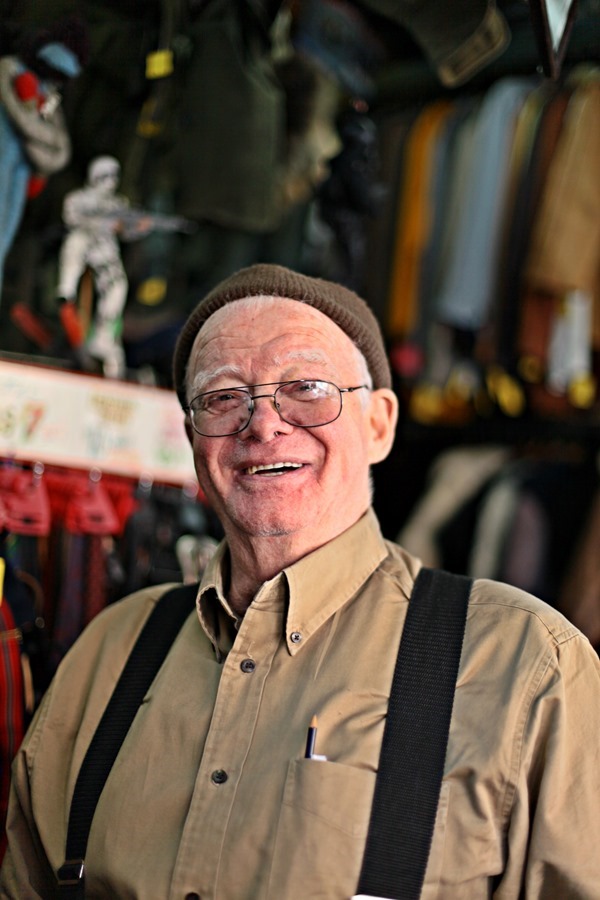 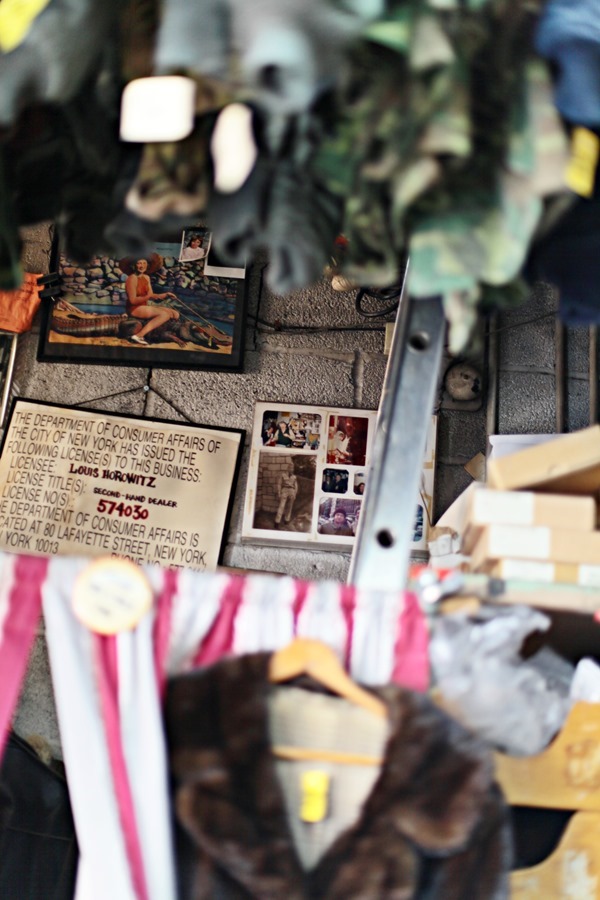 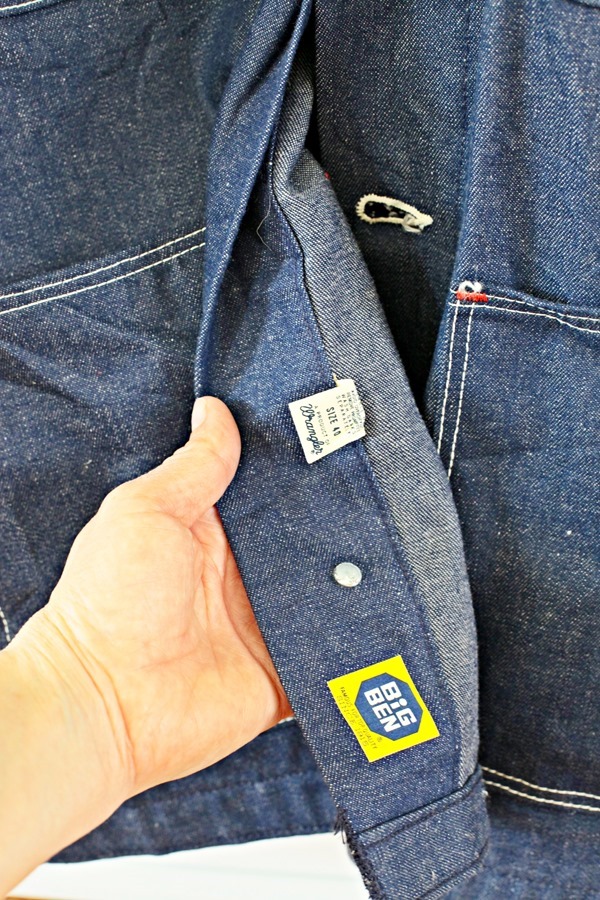 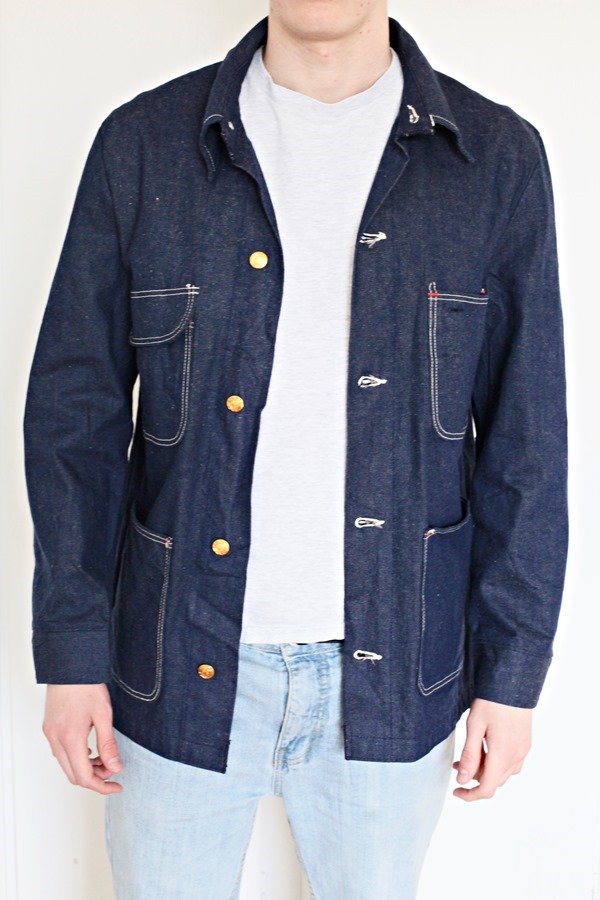 Our luckiest find in the army navy department though was when on the last day as we were making our way back to the hotel from Brooklyn and we stumbled across Church Street Surplus. Oh my, what a store! Wille and I just had time for a quick look but we could have stayed in there for hours. The owner is the sweetest guy, an ex military man himself. That’s him in his army gear in the photo next to the framed shop license. And in person. While Uncle Sam was more of an army fashion store with young rasta guys running it this felt more like the real deal.

I found this Wrangler jacket for Wille. It was manufactured by Big Ben, unused and still had the original paper label sewn in (unfortunately it fell off and got lost in the store). The size says 40 and I was hoping it was a woman’s European size 40 but it turned it that it was a man’s size 40 and that happens to be Wille’s size. I’m very jealous. I did got something for myself in there as well though. Will show you tomorrow! 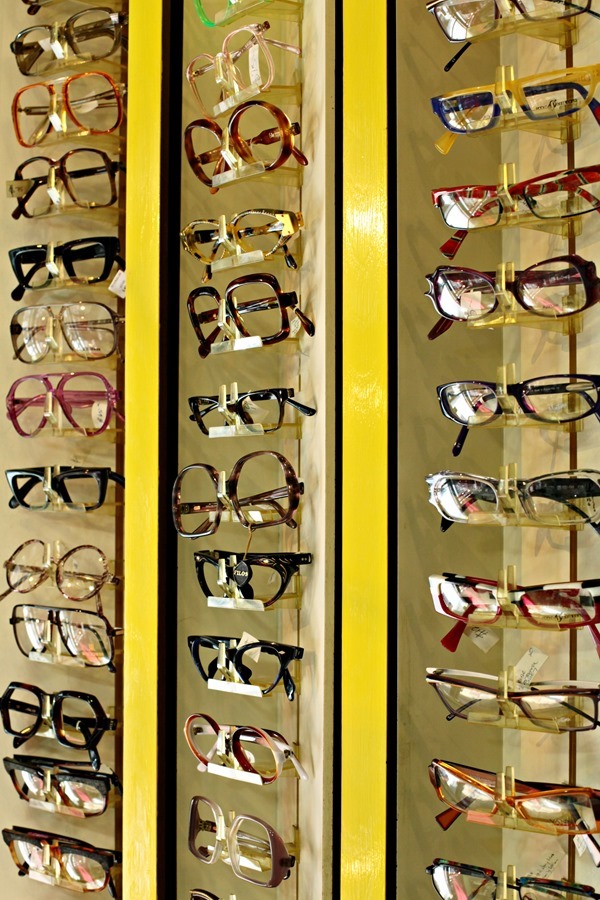 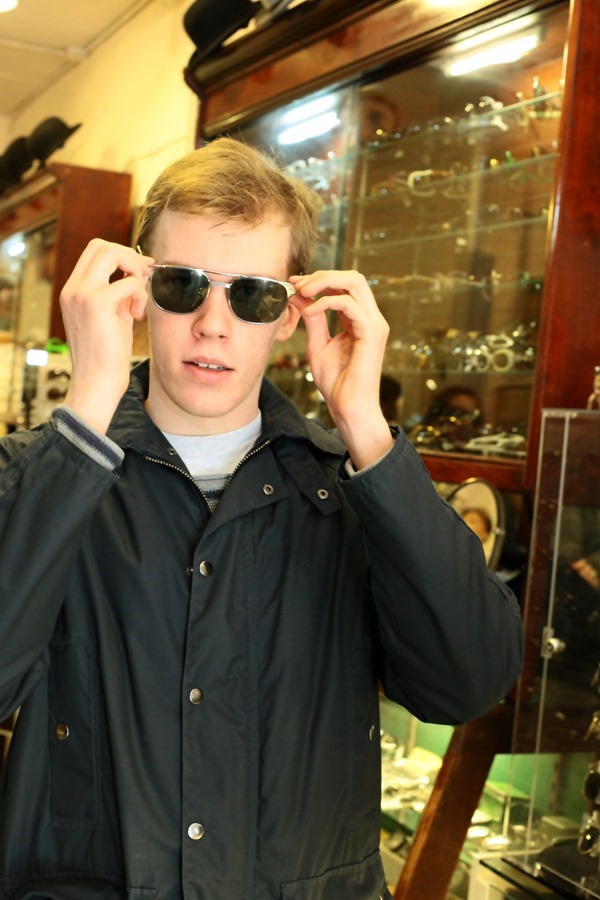 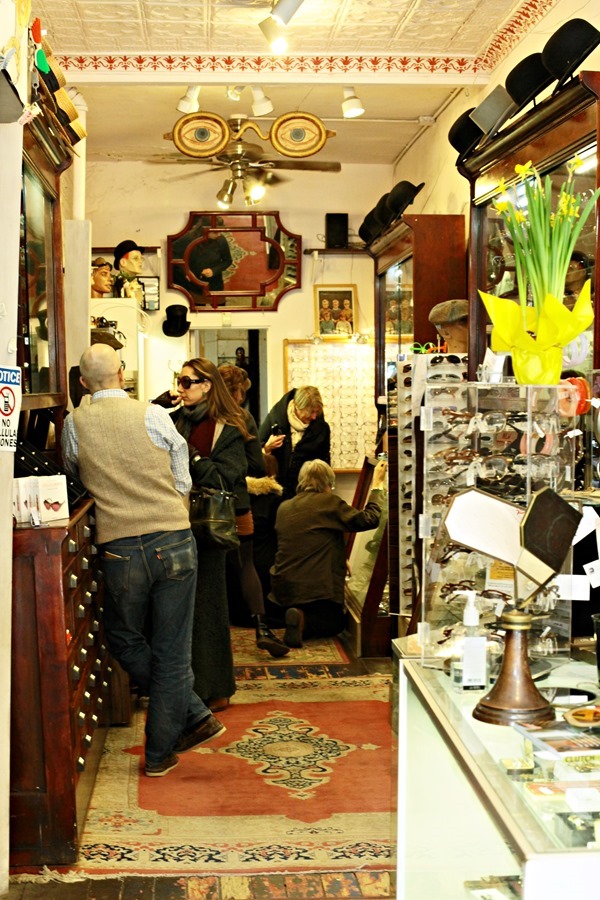 Another mission of ours on this trip was to find some cool sunglasses for Wille. He’s always felt that he doesn’t look good in any and while he has some Wayfarers (my now vintage tortoise ones from the 80’s) and some other styles as well he wanted find the perfect ones and preferably vintage on this trip.

We started out by looking in regular vintage and second hand stores in our Chelsea neighborhood but couldn’t find anything. At Family Jewels (amazing store btw. Sarah, if you go to New York you HAVE to go there!) they recommended Fabuolus Fanny’s which is a vintage store mostly dedicated to eyewear although they do have clothing too. We didn’t find THE sunglasses there but it was a very cool shop. 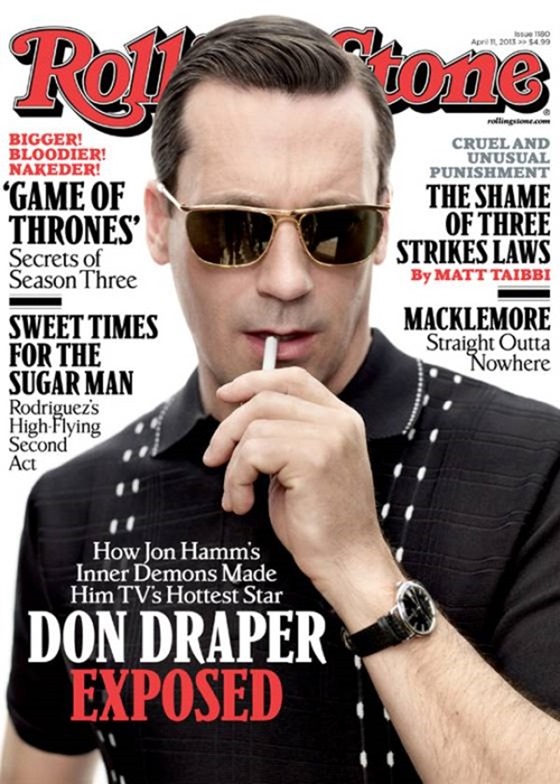 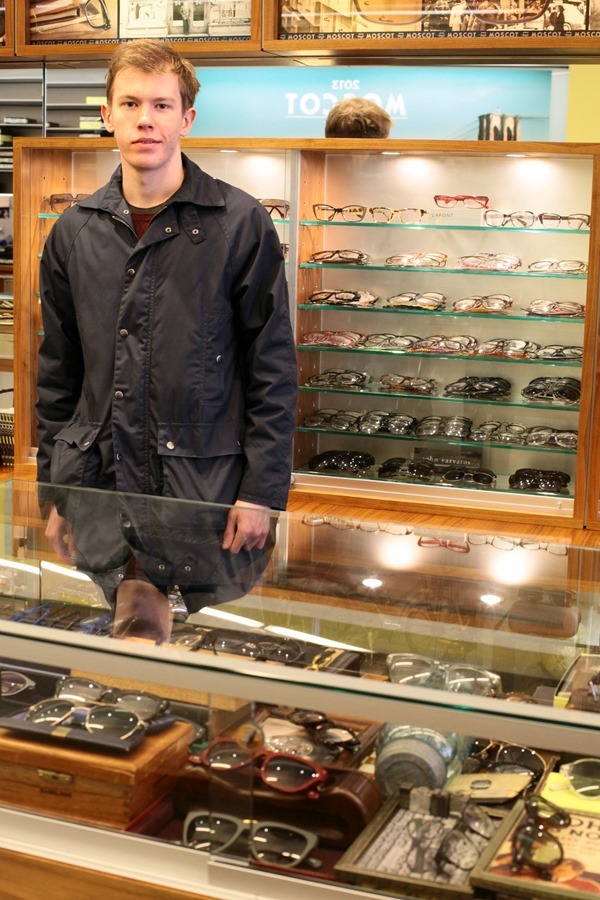 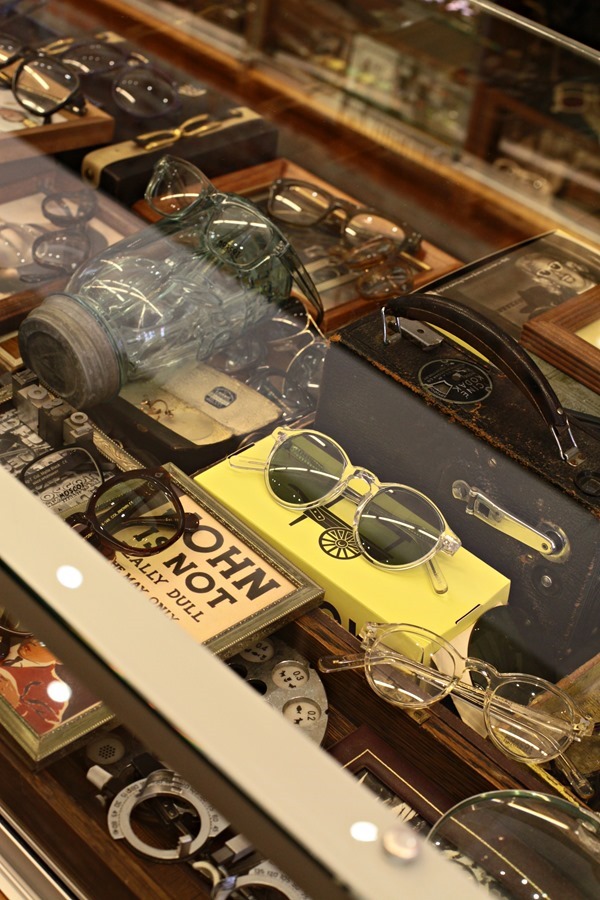 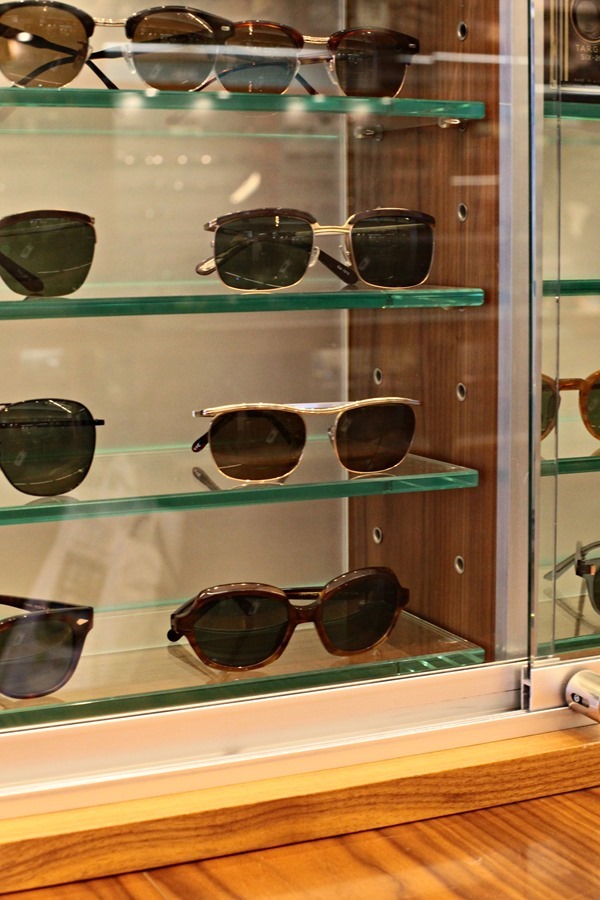 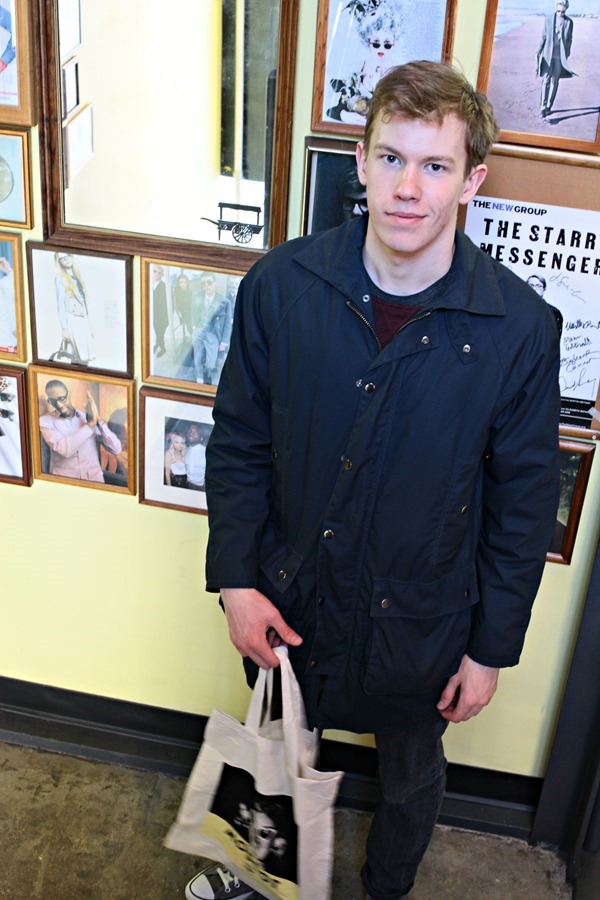 I knew of Moscot before we left for New York and was telling Wille we should go there for his sunglasses but he was unsure because he’d never heard of them. When we saw the Rolling Stone cover of John Hamm at Barnes & Noble and we were both going “Those are the ones"!”. We looked in the magazine to see if they mentioned the source but they didn’t. I said lets go to Moscot to see if we can find anything similar there. Guess what we found? Not the exact same but close enough! Wille is now the lucky and good looking owner of a pair of sunglass Izzys (third from the top two photos up). Look at the happy grin on his face. And again, what a shop! Amazing! 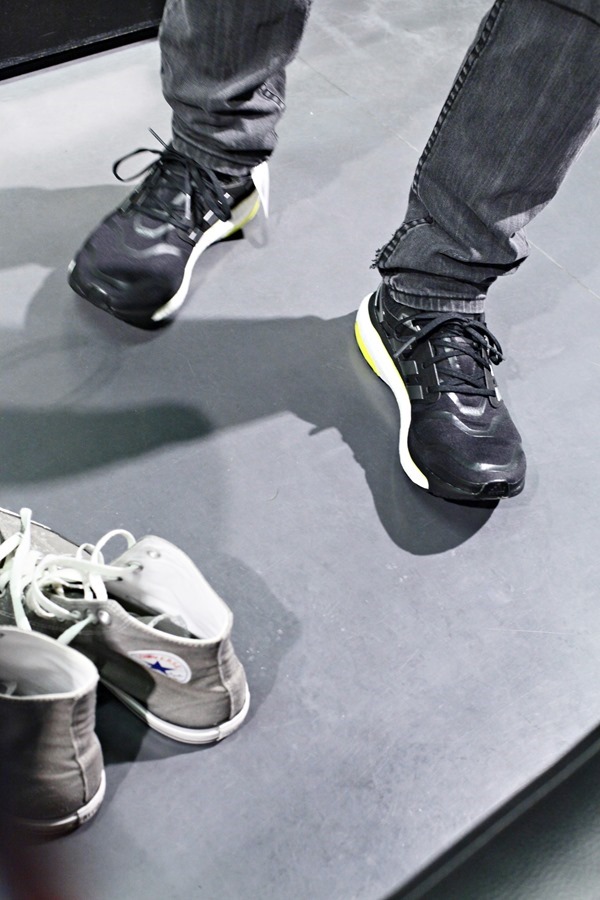 Another purchase we did for Wille was a pair of new running shoes. Wille had heard of the Adidas Energy Boost ones and tried them out at the Adidas Store on Broadway. Very bouncy. Trainers and such are about two thirds of the price in the US compared to here in Sweden and a good buy in the US for us so we got them. 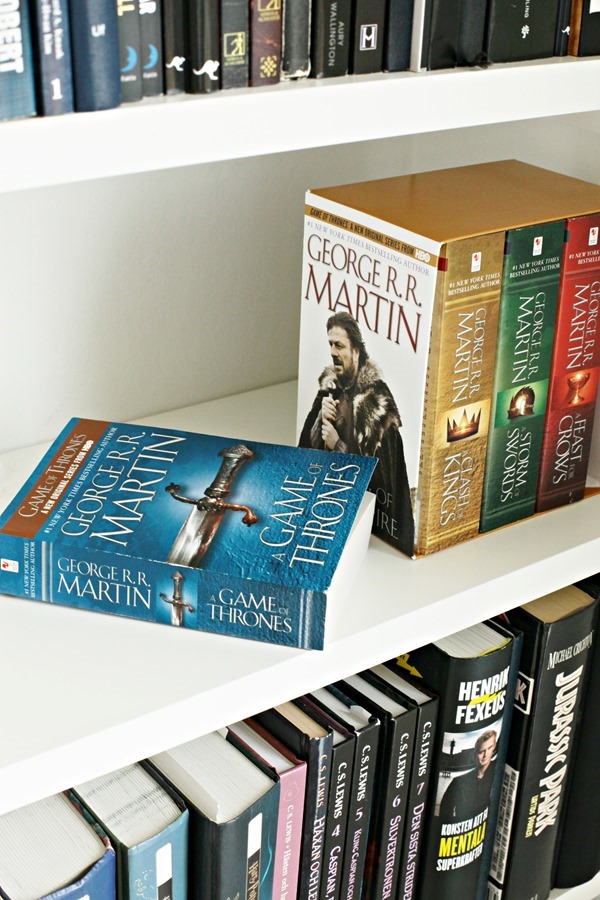 When we were at Barnes & Noble to look for something for me (more about that tomorrow) Wille went to look for Game of Thrones which he loves on HBO. The first four books came in a boxed set so we got that.

Together with the wand, all in all not a bad New York city loot for my boy.

Benita, thankyou for that list. I never make the right choices and you always seem casually put together, so it does help.

It's so uninspired and not post worthy so I'll just list it here:
For travelling I wore black leggings, a thigh length sweater dress, sneakers and a coat. In my suitcase I carried an extra pair of leggings for the trip home, a pair of jeans, a mohair sweater, a shirt (which I ended up not wearing), 4 t-shirts, underwear and socks and pjs. Oh, and an extra pair of shoes. C'est tout!

My favs are Wille's glasses and bomber jacket - maybe we can get that photo for a summary shot? I love that you and Wille had a great time in NYC!

Can you do a detailed article on what clothing you brought for your trip? Thanks!

I really see your face in his in some of these photos. And I see the love, too! What a great thing for a teenage son to have such fun on a trip with his mom. I think I would have been far too bratty at that age! Thanks for sharing the cool details!

Thank you for your answer. I would love to find good SHS in my city, sometimes I think 30-40 years ago they made better shoes, bags etc.
Easter Friday is official holiday in Germany, we don't work and everything is closed, on saturday everything is open again...

What a handsome young man! I'm so glad he was able to find everything he wanted. Looking forward to your loot tomorrow.

The picture of Wille in the cool shades is Rolling Stone cover worthy. The Church Street Surplus store looks great, I could happily browse there and the owner looks so hugable.

This year the Jewish holiday of Passover started on the night of March 25 through April 2 and yes, if they stores were owned by Jewish families they would be closed.
Great shopping by the way. Can't wait to see what you got.

Great finds!! Looking forward to my almost 14 year old son to enjoy shopping for clothes and accessories. He'd be all over a store with second hand video games. My 16 year old daughter and I, however, are drooling, and quite looking forward to your shopping post tomorrow! ;)

So glad you went Moscots.. Willie's cool factor has gone up considerably...Moscots is THE place for hip glasses! I would say it has been quietly cool for a really long time. That's really the key to being cool, in my opinion.

So we're more reasonable in prices than Europe, but the Europeans without a doubt have more style (in clothes & decorating) going on than the Americans (no offense to the Americans). I've always heard that the U.S. is behind in style (and music) at least 4 years. By the time it hits the U.S., the Europeans have moved on to something totally different.

As Easter is no jewish but christian holiday,your explanation for closed shops may be wrong. Pessach was earlier, perhaps the shop owners expect their custumers away on easter school holidays?
Angela, catholic
Germany

I hope I'm not sounding creepy, but I think you have a really cute son. :)

I'd say you are. Especially a lot of American brands that are coveted over here are much cheaper or not even available for us in our own countries. Sneakers, jeans etc are especially good value for us coming over. Wille and I went over with large bags almost empty and I've often traveled with an extra bag inside my suitcase for all the shopping :).

My husband has told me several times that his Swedish & Belgium colleagues that travel here on business to the states always go back home with an extra suitcase they buy (or already bring with them) full of clothes and other stuff because the say everything is much cheaper here than back home. They hit the malls and outlets. Are we really more reasonable in prices than Europe?

Loving your New York photos - they are making me nostalgic for a trip myself. And it looks like Wille got some great pieces.

As Erika says below it might be so that these shops have jewish owners and they take a religous holiday for the whole week after Easter. In Sweden shops don't close at all on Easter any more. Easter Friday used to be closed but now everything's open as normal.

The army navy stores seem to have a mix of new and vintage. The sweater Wille got at Uncle Sam's was unused but the jacket was second hand. The denim jacket at Church Street was old stock, so never worn but vintage.

It's always a good idea to check if there's any major jewish holidays going on when travelling to NYC. I'm guessing that's why the stores were closed. We've had the same experience, but with camera stores (all of them seems to be owned by jewish families). Luckily enough they opened the day before we left for Sweden again. :)

I want to shop there to, everything seems so affordable!
Why the shop the week Easter are closed? We don’t have this custom in Germany. Those shops are rally cheap compared to the european prices, is this all second hand?