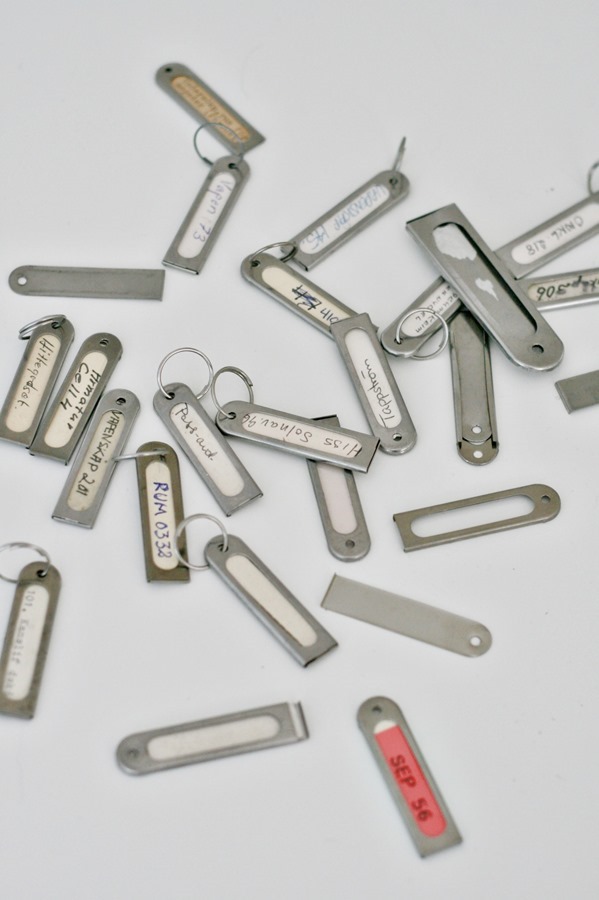 Remember these from back in August? 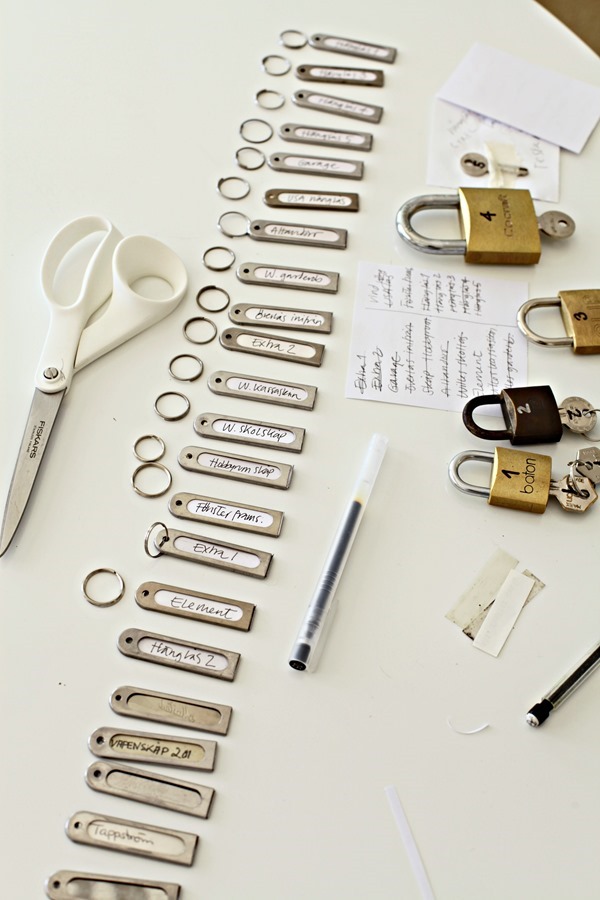 Well, I finally sorted all my keys and once again tried to determine which ones go where. Last time around I just tried them and relied on remembering which ones go where but this time I decided to do it properly by really labeling them all. Even the “obvious” ones which I realized aren’t obvious at all after I tried to tell Wille over the phone which ones go to the garage. Picture me going “there are two keys, kind of squareish but not really, slightly golden, or maybe silvery”. Yeah, that kind of applies to all the keys. 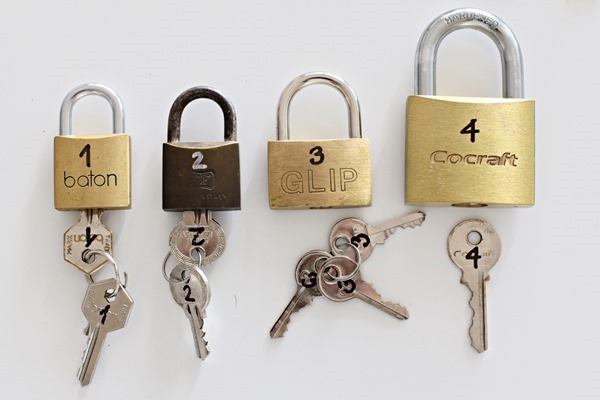 I also sorted our pad locks out. We have five of them (one’s in use in the garage) but about 30 pad lock keys. Needless to say they don’t all go in these five pad locks, some have been lost over the years so I once and for all numbered the locks and the matching keys + after this shot was taken added labels to the extra key/s leaving one in the lock and the rest in the shoe locker where all the keys in use are stored.

I’m holding on to the rest of the keys in a box in the basement so in case a missing lock magically appears I know where to look for the matching key. I would have loved to toss them but am afraid that if I do I’ll find where it would have gone right after. 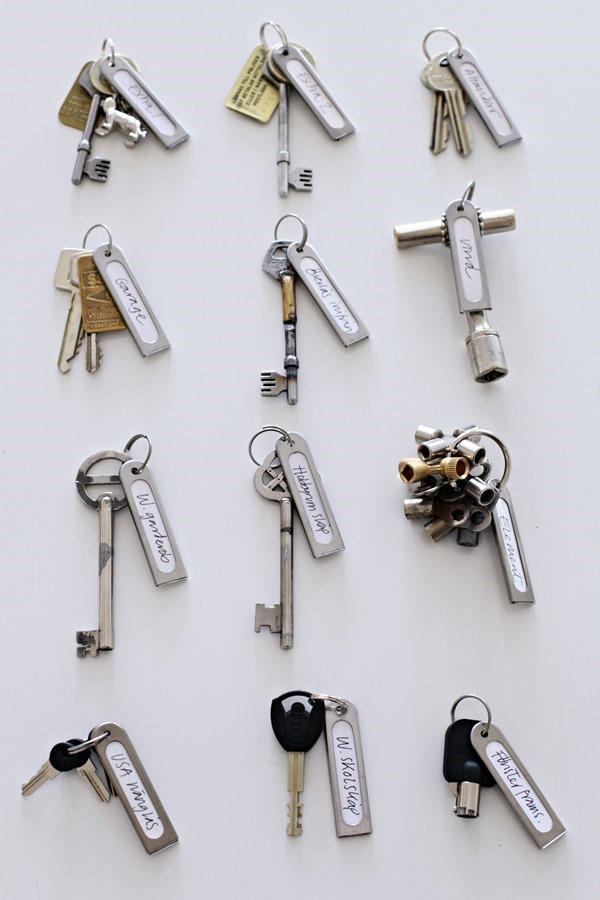 I love the uniform look of the label holders. And yes, I did keep the jail cell, weapons cabinet labels behind my new ones. 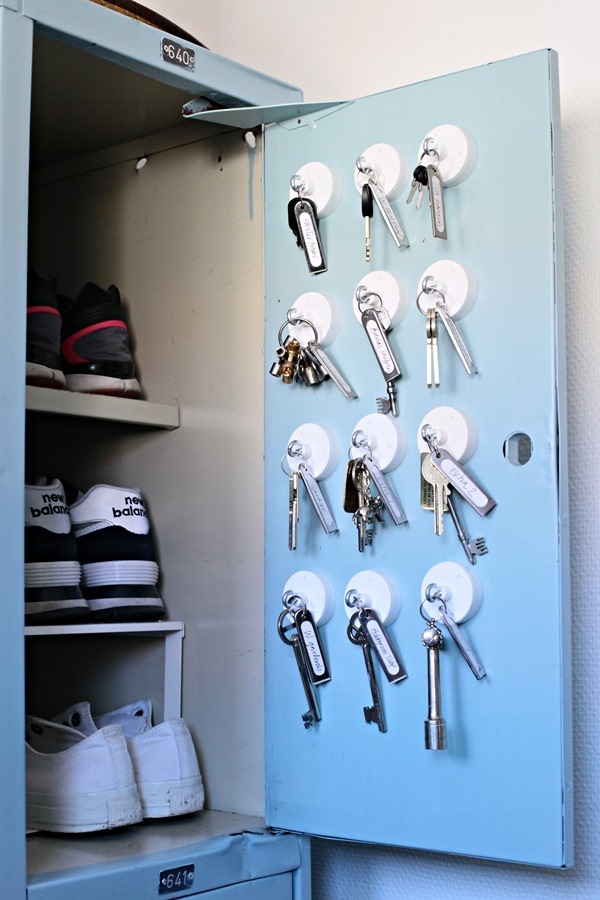 And there they are in their spot in the entry hall. I added a few more after this was taken after Wille woke up because I had to consult him on his bike keys and on some of the pad locks. So pleased that we can now both find the right keys for everywhere all the time.

Oh, just so you know in case you missed it in yesterday’s post, I’m off to see my mom tomorrow and will be away until Saturday which means this is the last post of the week. 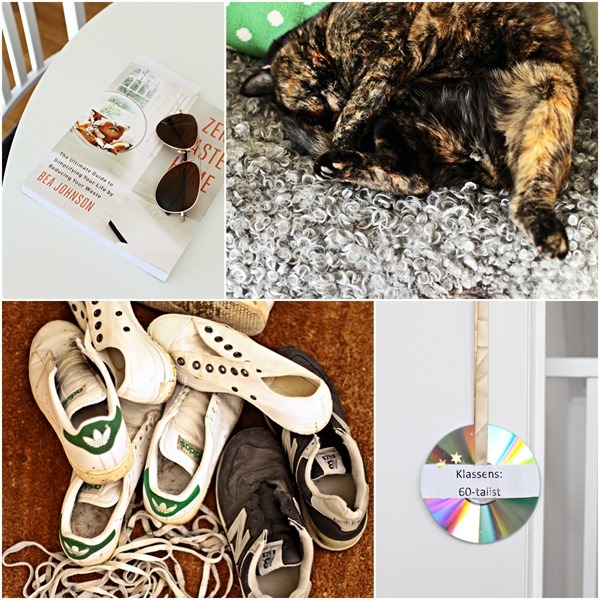 On Tuesday of week 17 Martin and I were invited to Wille’s class dinner. The food pretty much sucked, that place must have made a fortune on having us there, but the great thing about the dinner was meeting Wille’s classmates. Some I’d met before but some I’d only heard of extensively and I can now totally understand why Wille’s enjoyed the camaraderie part of these three years at school so much. Man, those guys are awesome. Funny, smart, polite AND cute. Wille was nominated “Klassens 60-talist” which is difficult to translate but basically means “the class’ guy from the 60’s” because of how his interest in that era in terms of music and fashion reflects who he is as a person. I loved that!

Also this week, my book order from Amazon arrived early which was a nice surprise. I was inspired by an article in Martha Stewart Living about Bea Johnson and her book Zero Waste Home. I’ve only read the introduction so far but it seems interesting. A bit disappointed that the book has no images of Bea’s beautiful home though.

Also this week I cleaned out the shoe locker, took inventory of my sneakers and scrubbed the dirt off and washed the laces.

Oh, and of course you already know that Mini and Bonus were 8 on Thursday!

Have a good week! I’m off to see my mom on Wednesday but I have one more post before I leave coming up tomorrow. 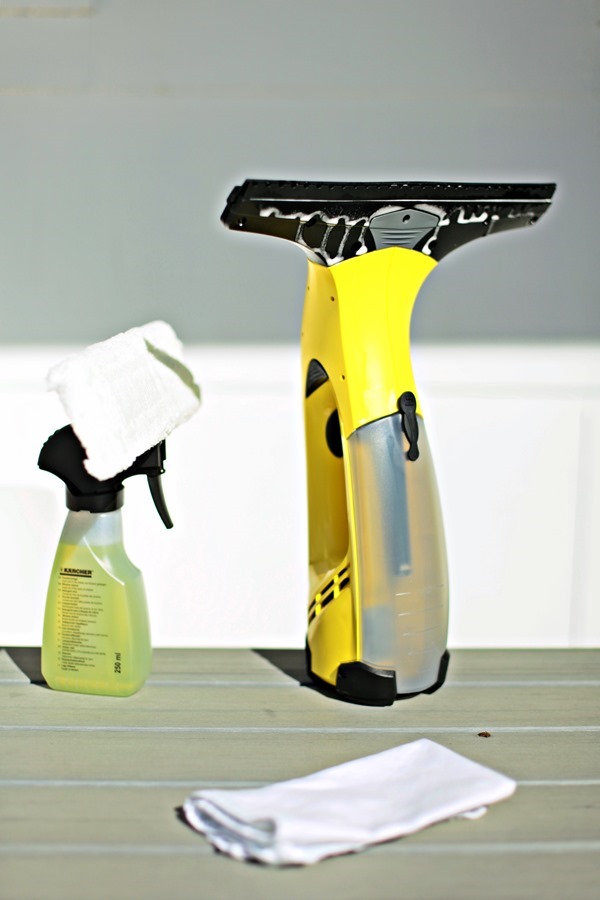 Two weekends ago I washed our windows. Yes, you read that right. Those of you who have read this blog for a while and those of you who actually know me IRL know that I don’t do windows. It’s not laziness, it’s inability. I’ve tried all methods but I kept getting them streaky or otherwise unsatisfactory. So these past years I’ve hired a window washer guy to come over and do them for me.

Then I saw the Kärcher window cleaner at my favorite store and my dreams were answered! And lo and behold it works! All you do is spray your window pane with the sprayer, loosen the dirt with the microfiber attchment on the sprayer and then use the squeegee thing (which is chargeable) to suck the dirt and water off. I’ve never cleaned my windows this efficiently and as happily. It’s still not my most favorite of chores but I don’t dread doing them again. Imagine that!

This is NOT a sponsored post, I bought and paid for this baby myself and I love it!