Living Room Before & After 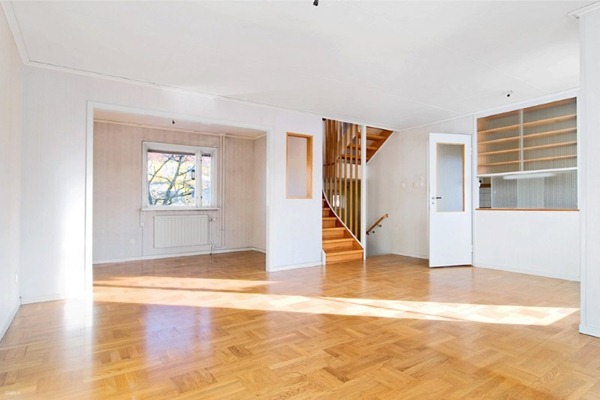 Today I’m sharing a before and after of our living room. I’m trying to become friends with my wide angle lens. I don’t love it, I much prefer my 50 mm 1.4, but the wide angle does come in handy for shooting interiors. My lens doesn’t have quite as wide an angle as the realtor’s photographer had for the photo above though so I can’t really take the exact same shot but close enough.

Anyway above is the before which was taken two years ago. The kitchen wall and door was still up, the walls and ceiling were dingy and there was quite a bit of orange pine going on in the staircase. 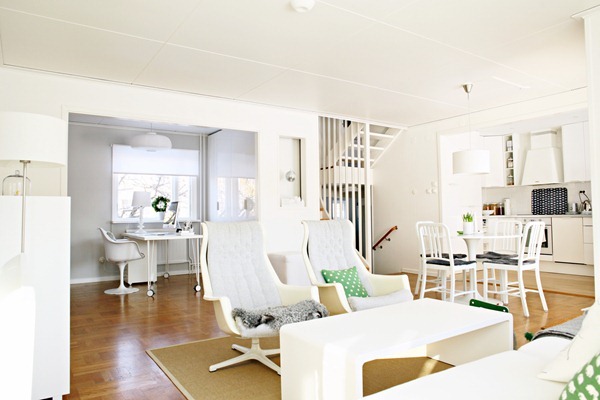 Two years later, it’s all mostly white although there is a grey wall in the office nook, the staircase is getting whiter and whiter and most noticeable, the kitchen wall is gone. I love the open plan and how light it is which is what attracted me to the house in the first place. The back of the house faces south west which our old house also did and I’ll remind myself to look for that in any future homes because it’s the best!

Speak of the Devil 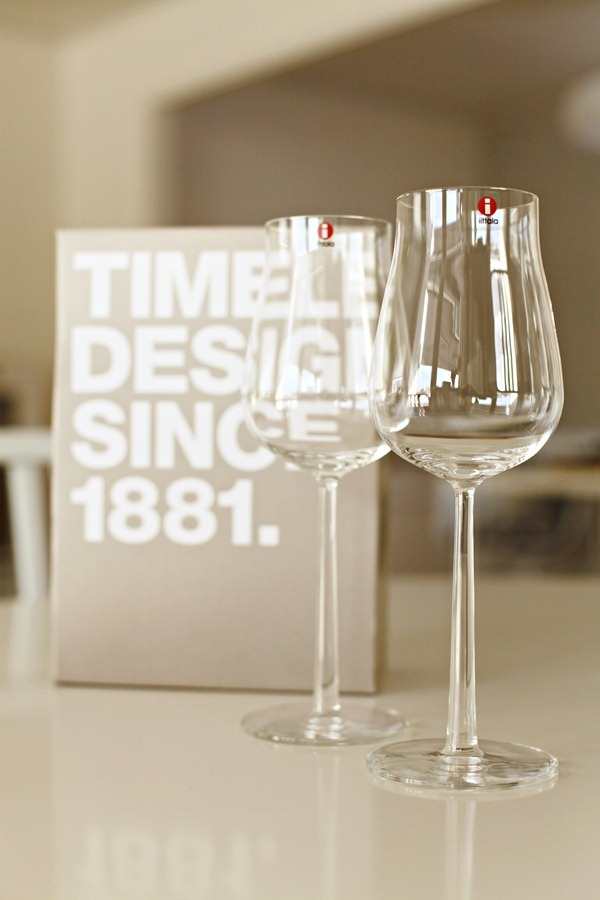 Speak of the devil. On Tuesday last week I wrote this post and mentioned I don’t have any nice tall stemware. On Friday this arrived on my door step. I knew via an e-mail from the week before that I was getting a surprise delivered but I had no idea what it was. Fate? 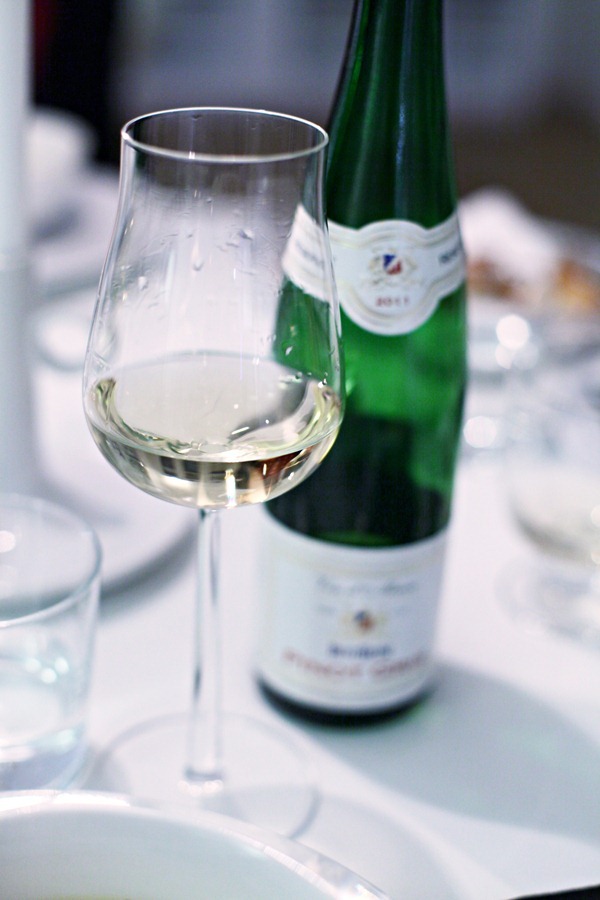 Anyway, having Anne over on Saturday was the perfect opportunity to test drive  these babies. They are Essence Plus by Alfredo Häberli for Iittala. 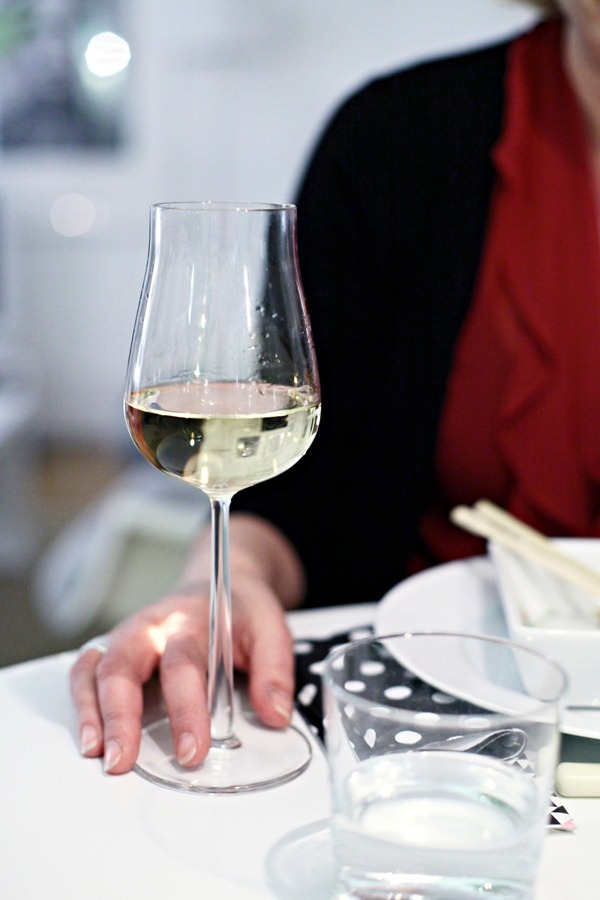 The new idea behind these is that you don’t choose the size of the glass depending on if it’s a white wine or a red wine but rather if it’s a lighter or heavier wine. 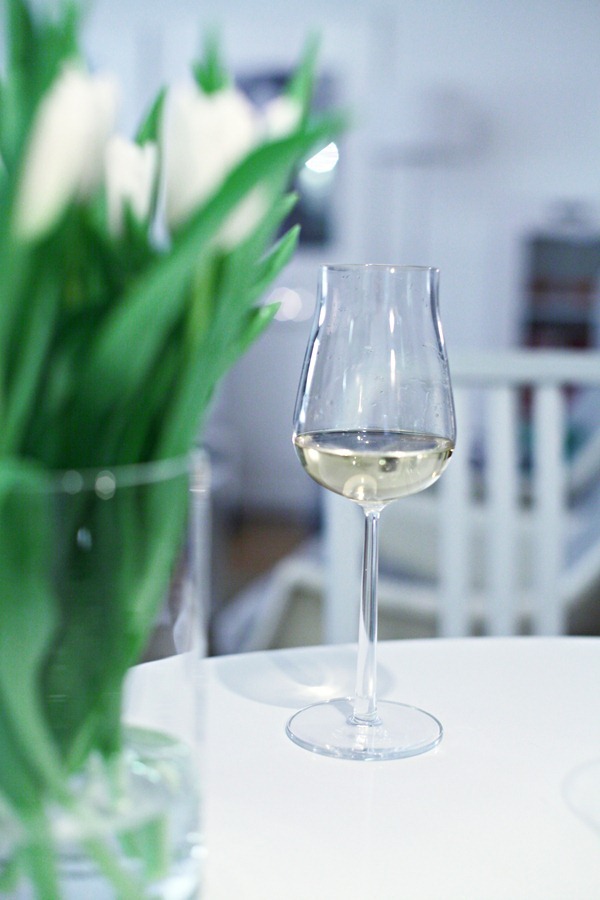 The tulip shape allows for the wine to be twirled around so you can get a better sense of the aroma and it’s why there’s a lot of moisture on the inside of the glasses in these photos, Anne and I were twirling away all evening. 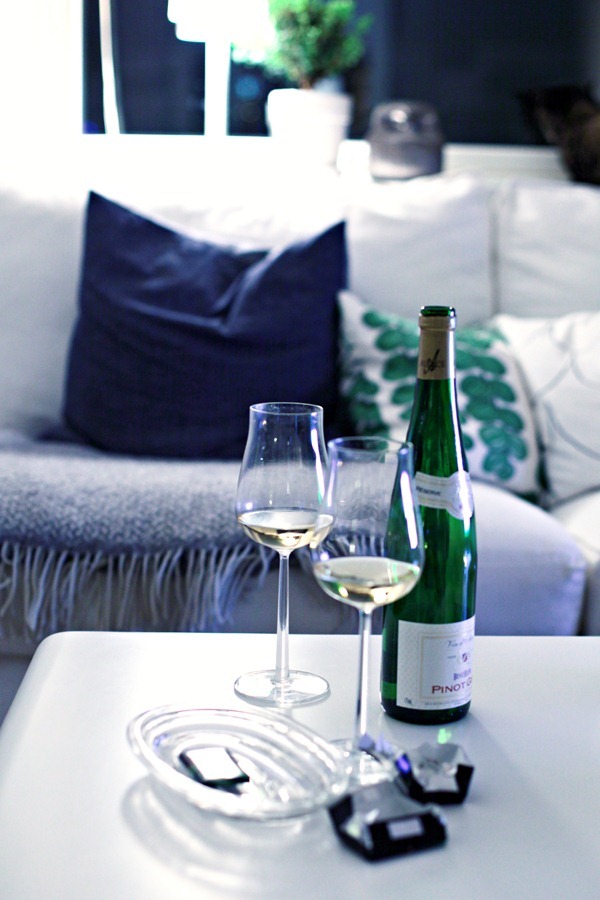 Getting these was such a nice surprise and while it’s probably not the stemware I would have chosen for myself (I’ve had my eye on the regular Essence which has straighter lines) they are very elegant and did feel lovely to drink out of. 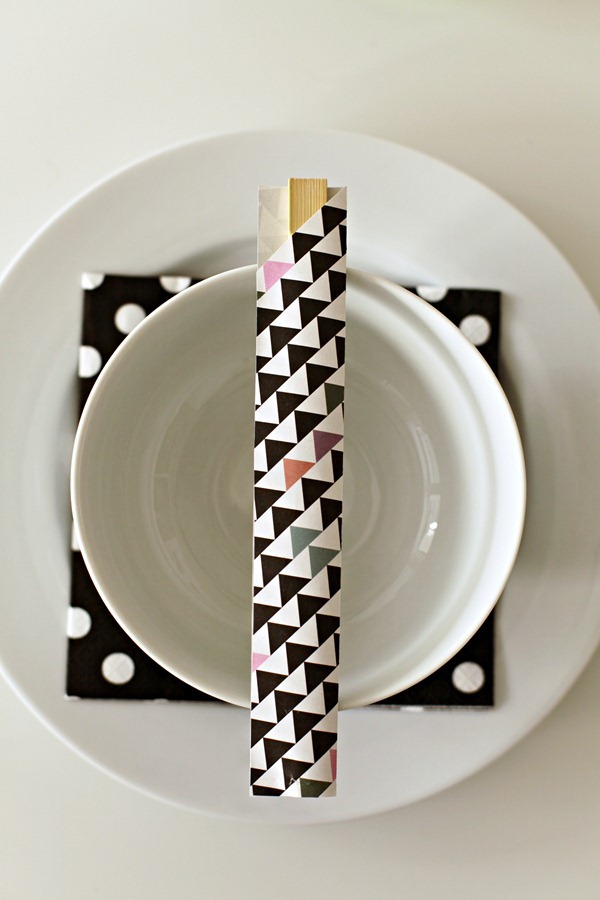 Anne came over on Saturday for dinner and much needed conversation. 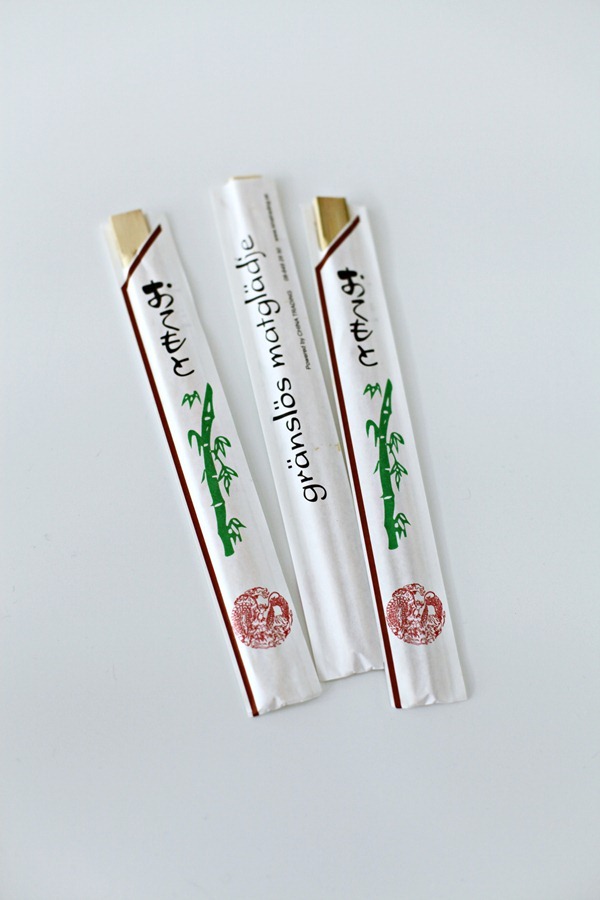 I made dinner where both the starter and main course happened to have Asian influences but realized I didn’t have any nice chop sticks. I’ve been to China god knows how many times but can’t set the table with three sets of chop sticks because I’ve used them all as paint stirrers… I did have these that where left over from previous take out dinners though. 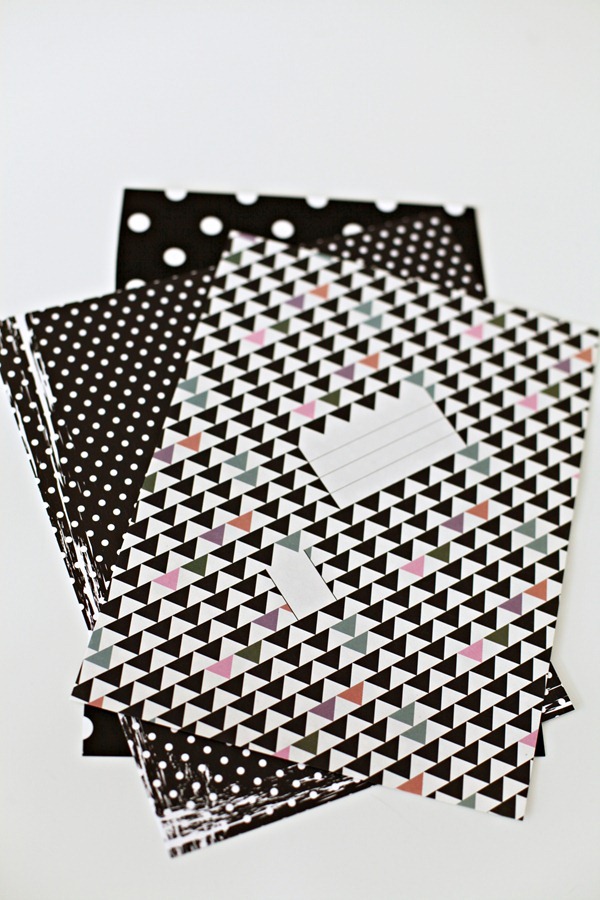 I figured I could swap out those little sleeves around the chop sticks with something prettier so I took inventory of my craft papers and found these three contenders that would go with the polka dot napkins I wanted to use. 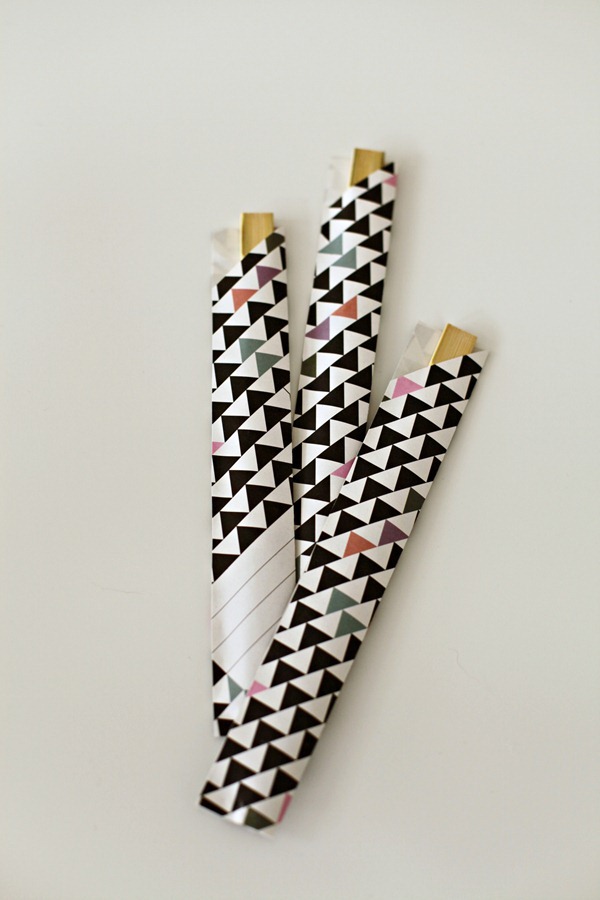 I went for the triangles and it was just a matter of cutting the paper to double the width, snipping off a corner and gluing the side and bottom shut. 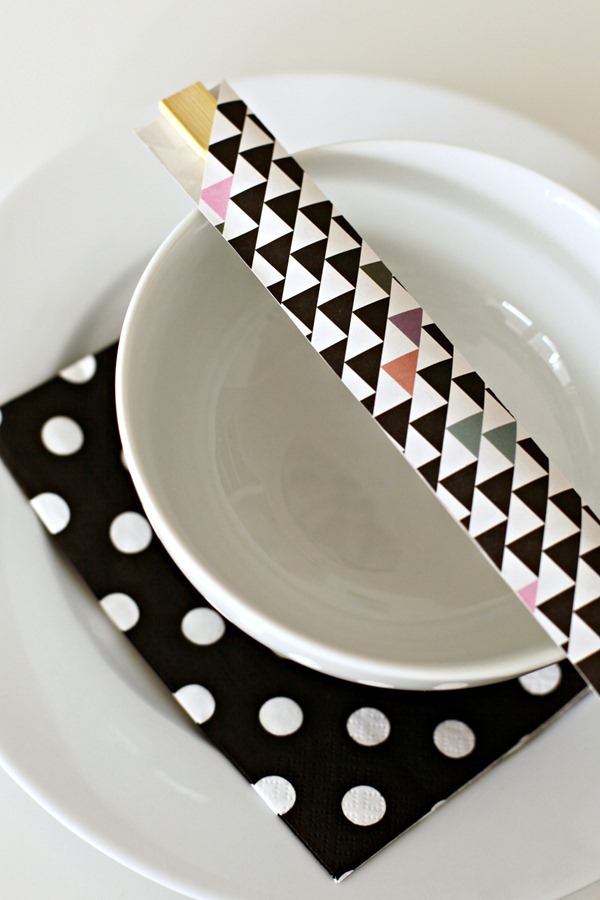 The polka dot napkins are by Marimekko by the way. I got them at the Marimekko store here in Stockholm as a surprise thank you gift for signing up for their news letter. 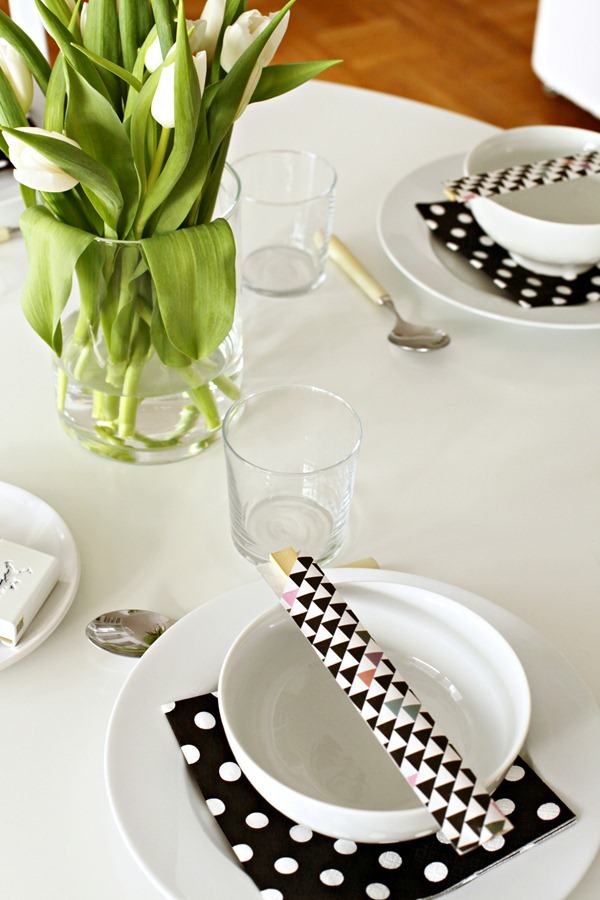 And there they are my spruced up chop sticks. Chop chop!