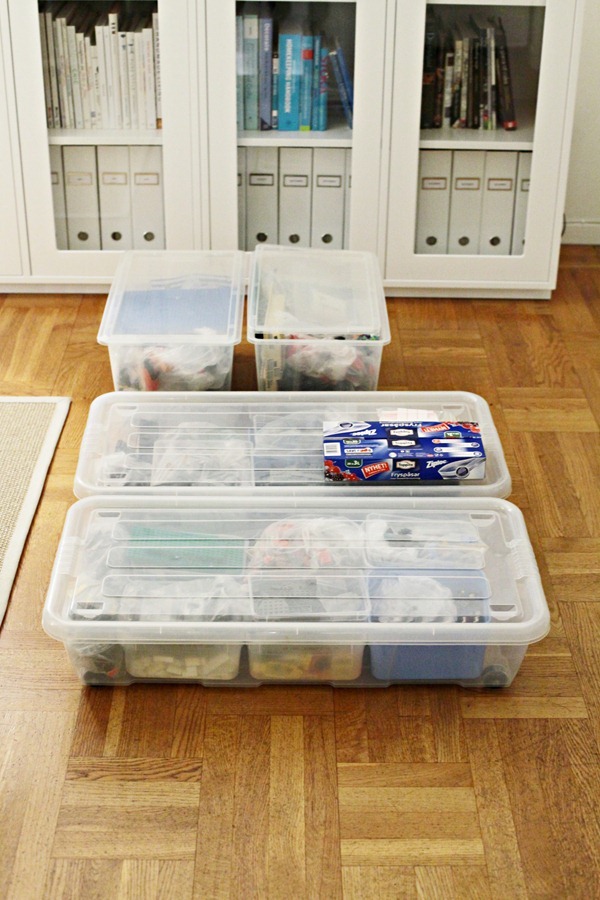 Last weekend I figured because the weather was so cold and dreary that I’d reorganize Wille’s Lego collection. Not only did I want to sort it all, I also wanted to minimize it so it would all go into those large bins instead of taking up four bins altogether. 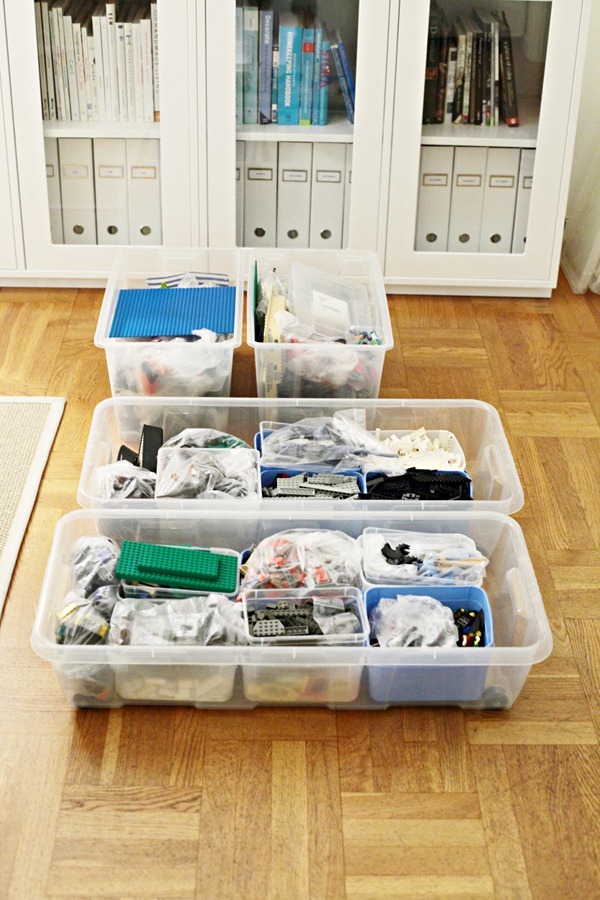 I figured that the bins the Legos were semi sorted into took up too much space in the larger bins so Ziploc bags were the way to go. The air could be pressed out of the bags before zipping them and then stacking them into the large bins. We did quite a big sort out a few years ago so we had a pretty good system already. The regular bricks were sorted by color, the little Lego men were sorted together with their hair-dos and outfits in one bin, the animals were in another etc. It was still a bit of a mess though and quite a lot was unsorted or just shoved in random plastic bags. 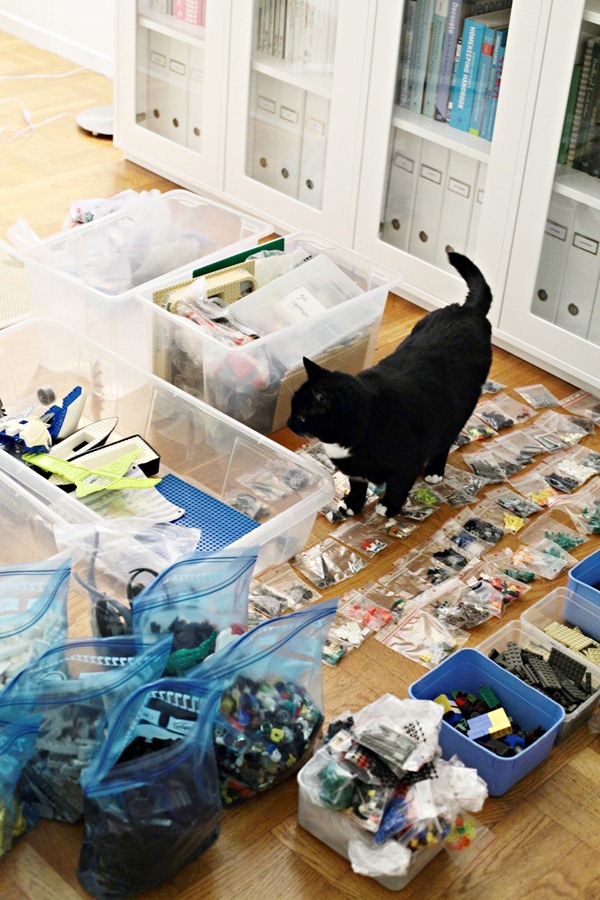 Half way there but still quite a long way to go. Bonus and Mini made their regular inspection rounds to make sure the sorting was up to their standards. 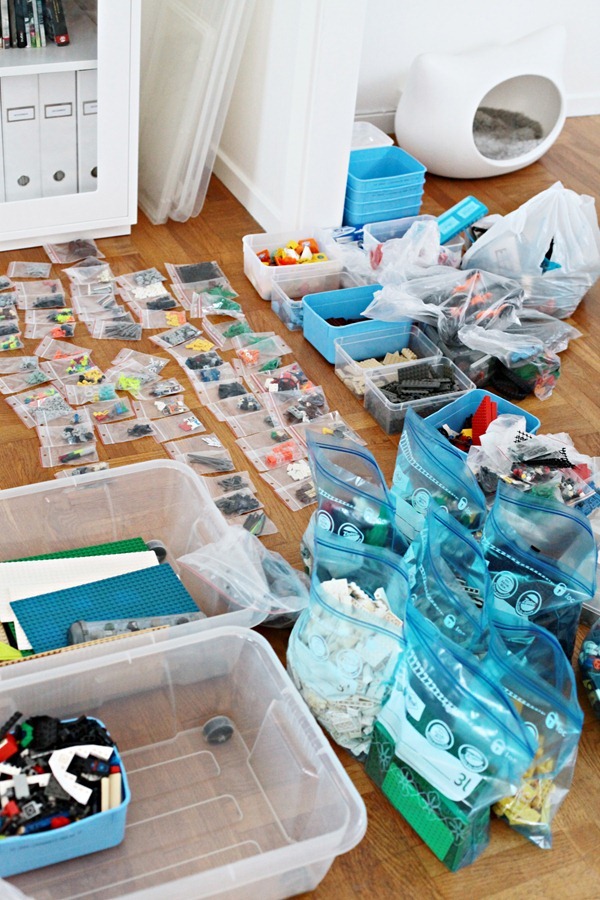 So the idea was basically to keep the original system we’d had but transfer the large portions into the 3L bags from the grocery store (WHY btw are they blue?! So annoyed when I opened the package and realized that.). Tiny pieces (like dragon’s flames, builder’s tools and gold coins) were sorted into tiny bags which I got in a stationery store in Hong Kong years ago. Luckily I had already started doing that last time around so now it was just a matter of getting the stuff out of those mixed bins and bags and sort those where they belonged. All the odd pieces (curved ones, printed ones, hinged ones etc etc) simply went into three large bags. Some sets that were already together in plastic bags were transferred to Ziplocs to keep them semi intact. It took me almost all day on Saturday but mission was accomplished! This is not a good system if the Legos are being played with but I love how it turned out for long time storage. I was able to fit everything into the large bins like I’d hoped and was left with a bunch of empty bins I can use in other places around the house instead. 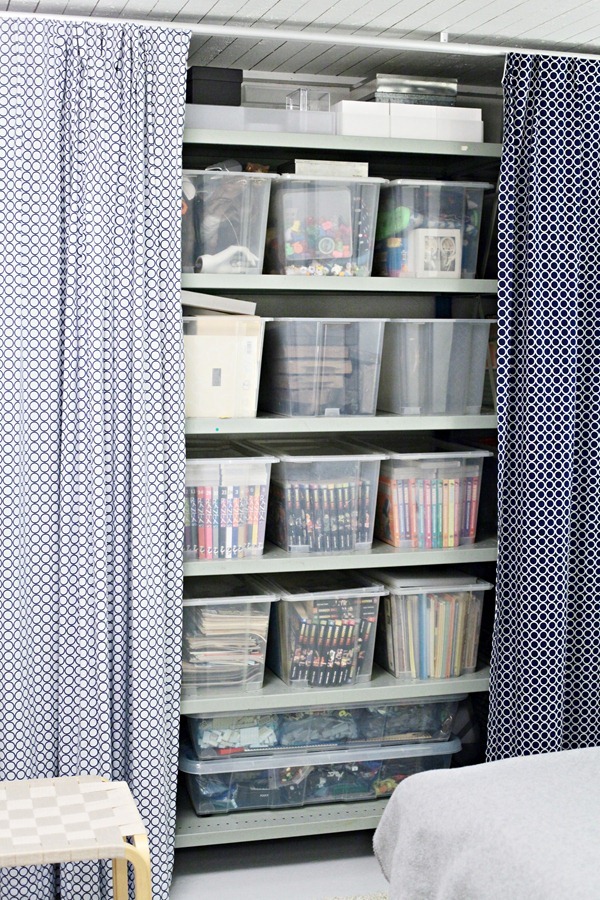 And there they are, the bins, fitting snuggly on the bottom shelf behind the curtain in the basement. We’re also saving four large sets (Harry Potter’s Hogwarts, Life on Mars and a couple more) in their original boxes which aren’t included here. Also all (yes, every single one!) the instruction leaflets are saved in two fat binders. Lego was such a huge part of Wille’s life for over ten years and he wants to keep it all but it does take up SO much space. I can see Wille moving to his own place one day and me moving into the city with limited storage possibilities for both of us and we’ll have to rent a storage unit just for Legos, haha! 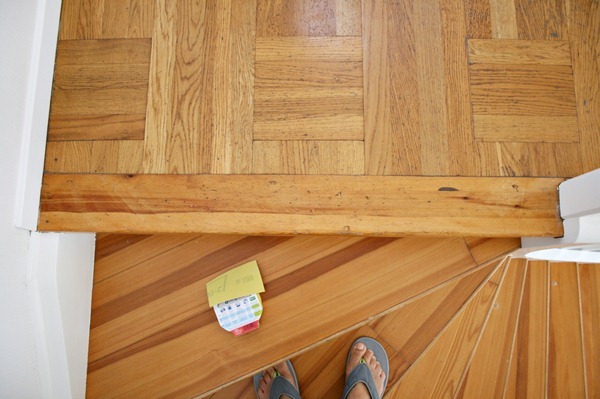 So the saga of the stairs continues. One of the problems I encountered when choosing what to do with them is that although the landing in front of the bathroom has oak parquet, the nose is still pine. I considered replacing it with oak but realized that I’d have to semi dismantle the whole staircase to do so because the uprights rest on and are built into it. 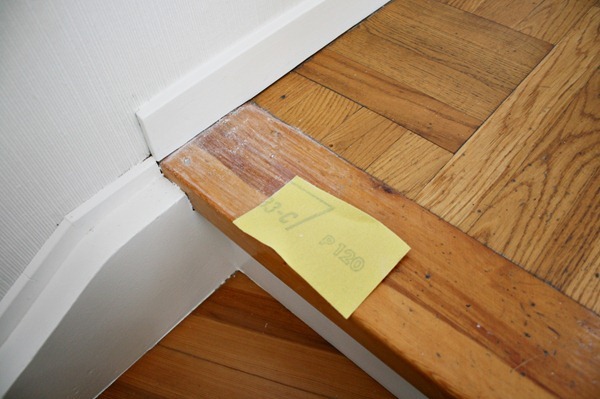 While I was staining the handrails  back in September I decided to have a go at the orange pine of that nose too, I figured I had nothing to lose. Actually in these photos it looks like the pine is a pretty good match to the yellowed oak but IRL it’s a different story I’m afraid. The pine felt really orange.

Anyway it was just a matter of lightly sanding the varnish on the nose. Not necessary to remove it all because I used a stain + varnish in-one product, but just so it would get a better grip 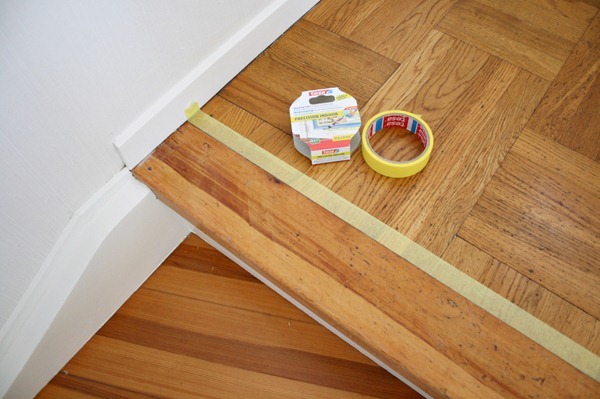 After sanding I taped off the area so I wouldn’t get the stain on the oak. 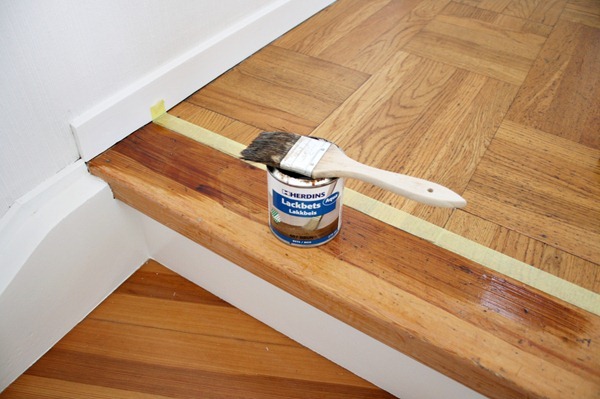 Then I just did a light coat with a brush dipped in the product. 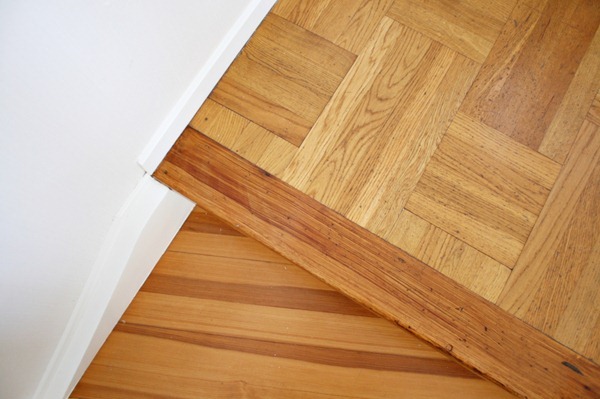 Here’s the result. Again it looks browner in the photo than IRL but it’s actually a good match . At least the color is deeper and richer than the orange of the pine. 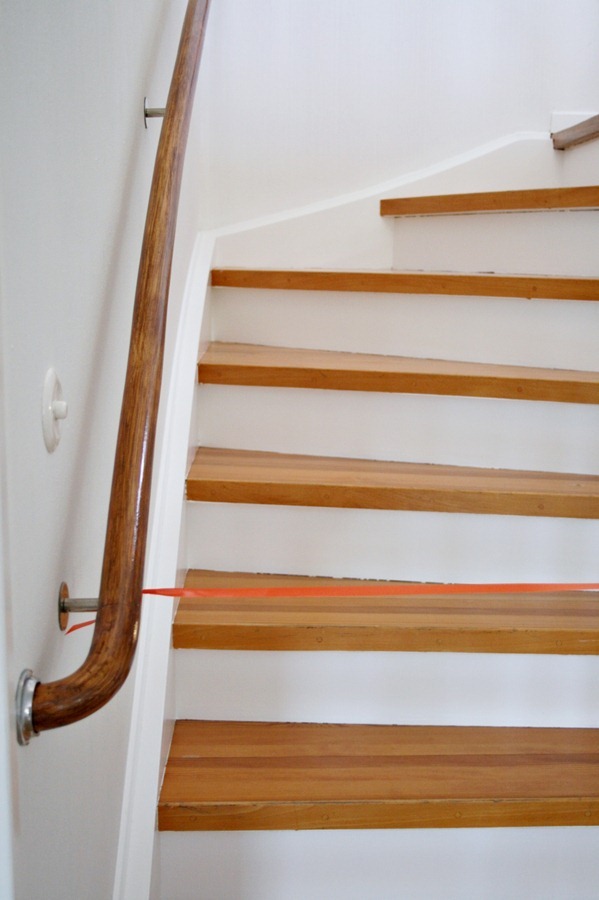 The nose now also matches the stained handrails which is really nice.

Again, this project has dragged on forever and these photos were taken back in September but I’ve really been so torn between what to do with the stairs and also in how to best share the whole process with you. 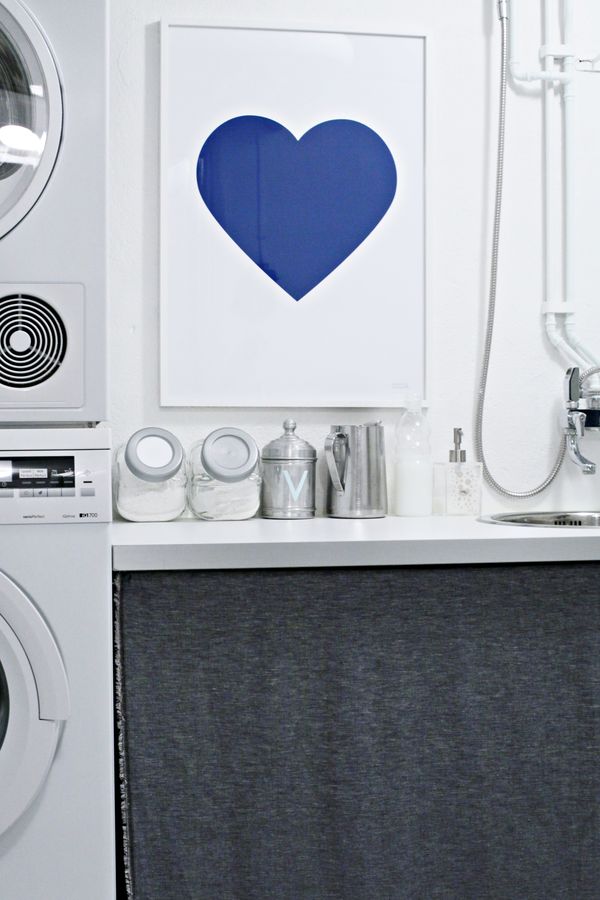 Hannah, a reader of mine got in toucha couple of weeks ago. She's got a web store, Showler & Showler where she sells prints. Cute prints! She kindly offered me the print of my choice and since I'm always on the lookout for new art I was game. 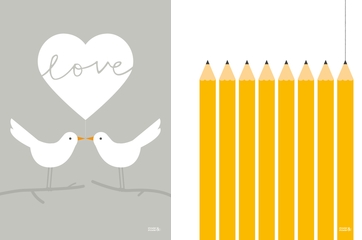 The reason for my choice of a navy heart? I love (pun not intended) that it's sweet, graphic AND navy. All at the same time. I also love the pencils print and the love doves in grey. If you have kids the store is a tresure trove of art for kid's rooms! 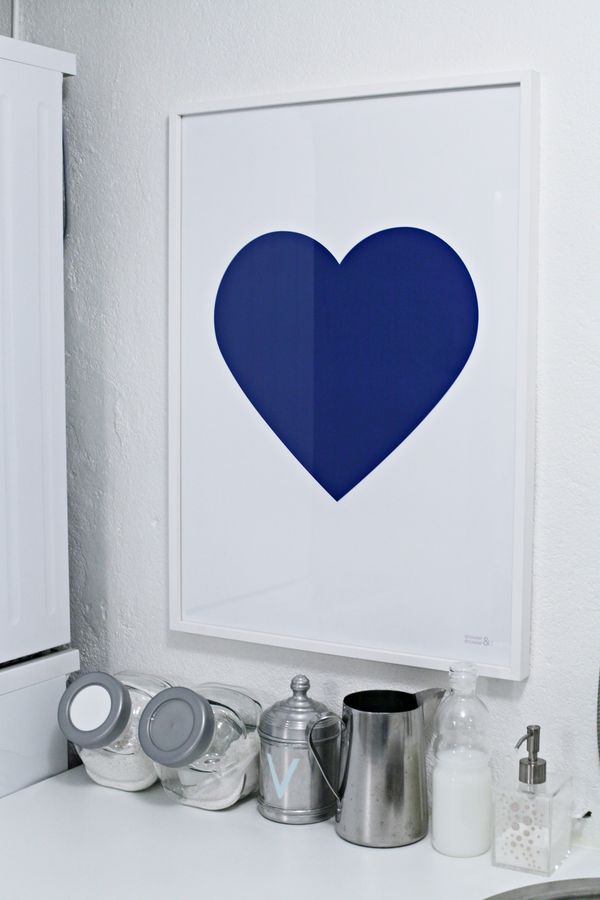 Hannah is kindly offering you guys 20% off on all Art Prints in her store. Please enter discount code SHOWLER20 during check-out. The offer is vaid until February 28th.

Thank you so much for the print, Hannah, I love it!