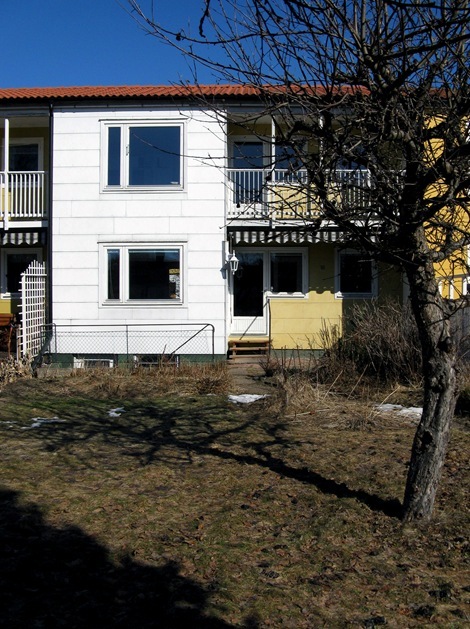 I’ve received quite a few requests to see the new garden so when I went to the house on Saturday I took some photos. Please excuse the quality, but the sun was so bright and I didn’t really have the option to shoot at dusk or dawn which is supposedly the best light for garden photography.

Almost all the snow is gone now but the lawn is still very wet so I did my best to stay off it but I couldn’t help poking around in the bushes. My sweet new neighbor came out and she told me about some of the plants. Some I can’t wait to see (like the peony and the roses) and some I can’t wait to get rid of (some evergreen prickly shrubs).

Anyway, that’s the back view of the house from the garden. I’m for insurance reasons not allowed to do any work in the house until the 29th when I officially get the keys and all the rest of the money is transferred to the seller but I can’t see any harm in clearing the neglected garden a bit. And since there was a rake, a shovel and a spade right there waiting for me I kind of started…

The previous owner was an elderly lady who had been a keen gardener but due to illness and old age hadn’t been able to tend to the garden the past few years so I’ve got my work cut out for me. I’m really excited so see what pops up. This first year I’ll just clear things and clean things up but otherwise leave them so I can see what the garden looks like as is until I start making my own mark on it.

Here are some photos of my Saturday’s worth of labor: 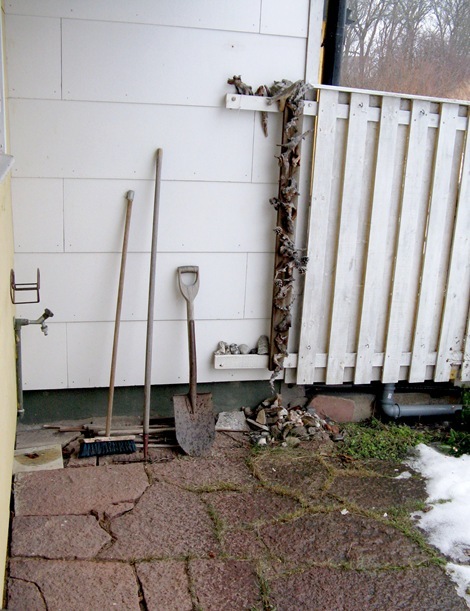 This is the corner of the patio the way it looked the first day we viewed the house. I have to say I hate the pink paving stones. I had acres of the same (Ölandssten) in our current garden and got rid of every single bit but I think I’ll try to learn to love it this time because it’s the same in all the gardens and original to the area. I may lay decking in this area next year though but keep the paths that lead through the garden in stone. 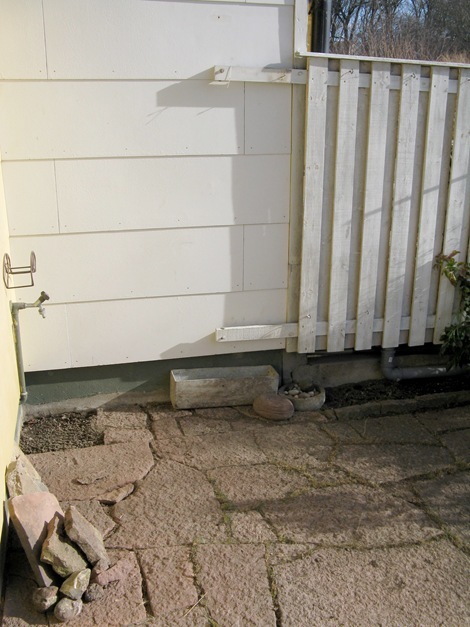 On Saturday I removed the plank with the driftwood, sorted all the amazing fossils (Wille’s really excited about them) from that pile of stones in the before shot and unearthed the cool asbestos cement planter under a bush. I also started removing weeds and moss from between the stones. I’ll bring better tools next time and try to remove it all and later fill the gaps with sand instead. 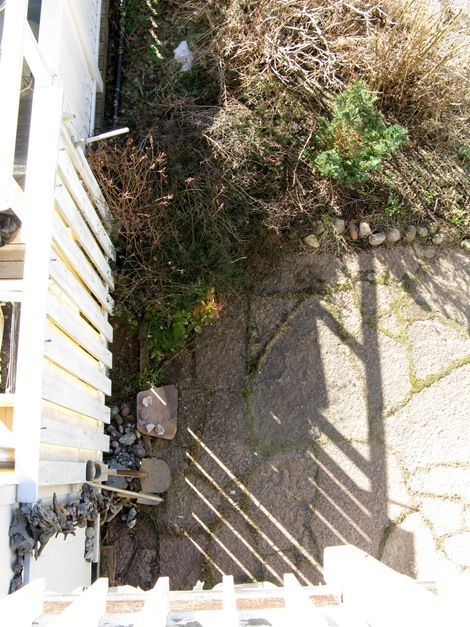 Here’s that corner from above before… 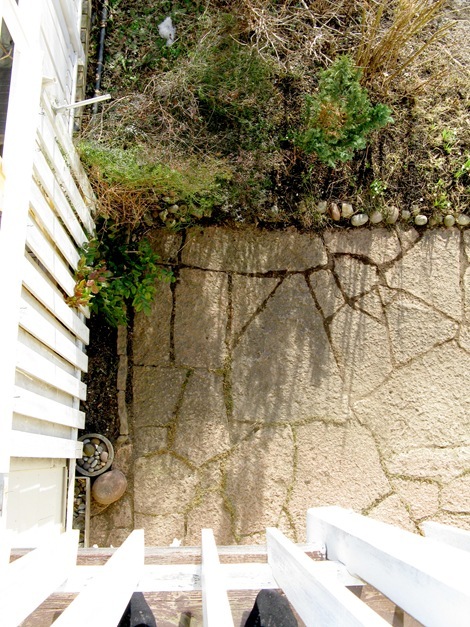 … and after my Saturday session. Still a lot to do but it looks cleaner and somewhere where I will have no problem putting our patio furniture when we move in once the rest of the weeds, grass and moss is gone. 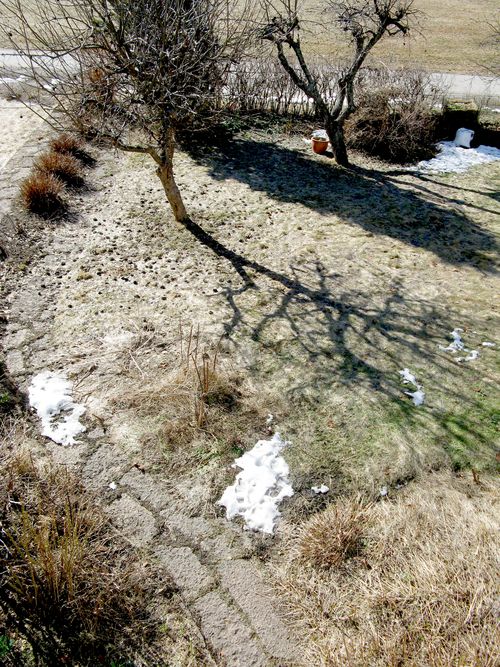 This is the view from the balcony. It was the first I saw of the stone path that leads out of the garden to the park behind. You can also see the apple tree to the right and a plum tree to the left at the back. The bush behind the plum tree is a gooseberry bush and it hides two compost bins. 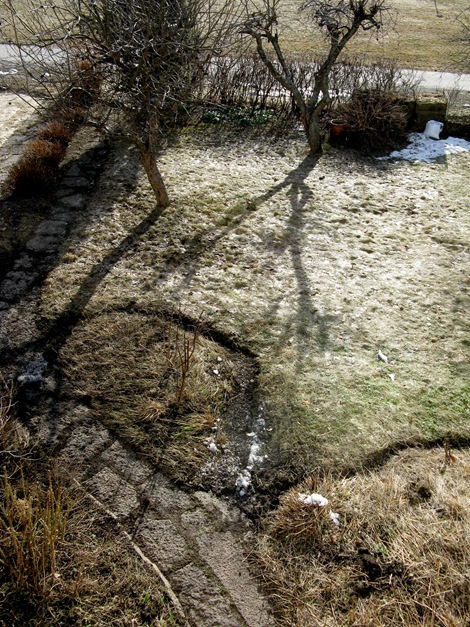 After some raking, digging, and hacking away I cleared the path a little bit and unearthed two further paved paths around two flower beds They’re not fully excavated yet but I’ve made a start.

The thing with the layout of this garden is that it’s completely the opposite of what I picture I want. I figured that since I have this narrow rectangle I’d do something minimalist and symmetrical but now hearing about this lady, the previous owner, being a keen gardener makes me want to check out her garden first before I make any drastic decisions and changes. It may still become the modern garden in the end but I’ll keep hers on a little while first. 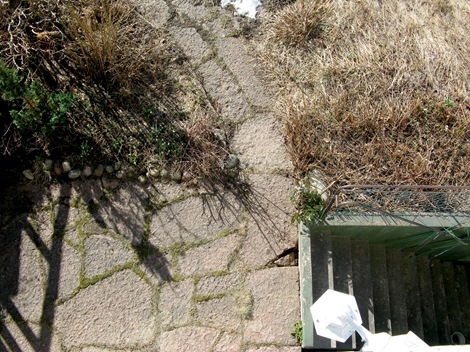 Lots of moss between the pavers. Like I said, I have my work cut out… 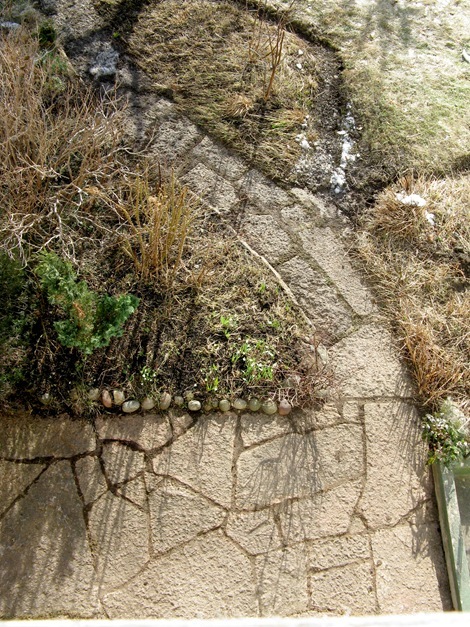 … and it’s very rewarding when you start removing it.

One cool feature in the garden are all the round stones that edge the flower beds. I may not want them exactly where they are but I will reuse them somewhere.

So that’s the back garden. There’s a little tiny one at the front too and it houses a cherry tree and an overgrown postage stamp of a lawn which I’ll probably end up removing and laying gravel instead. All the trees need pruning desperately. In our current garden I’ve done all the pruning myself but I think I will call in an expert this time because they don’t just need a trim, they need completely new hair cuts. I can cut the bangs myself from then on. 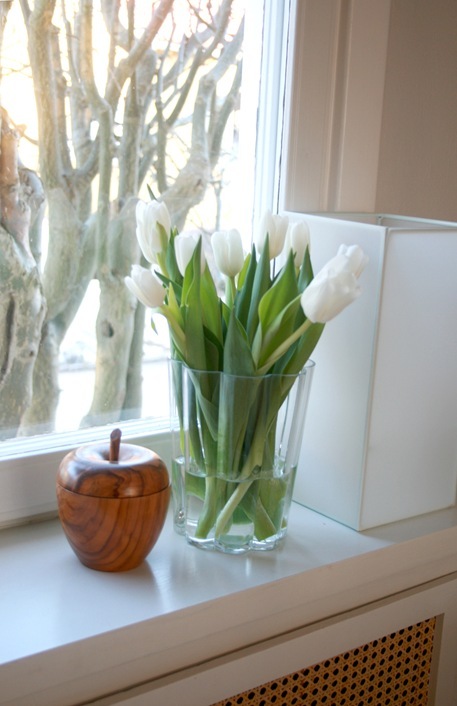 So with our house not selling immediately we’ve had our fare share of open houses and viewings. Thought I’d tell you of a few of the things we’ve done to prepare for them besides the endless cleaning.

Fresh flowers. Nothing over the top but making sure all plants (two ivies and two orchids) looking fresh and a bunch of crispy tulips to welcome everyone. 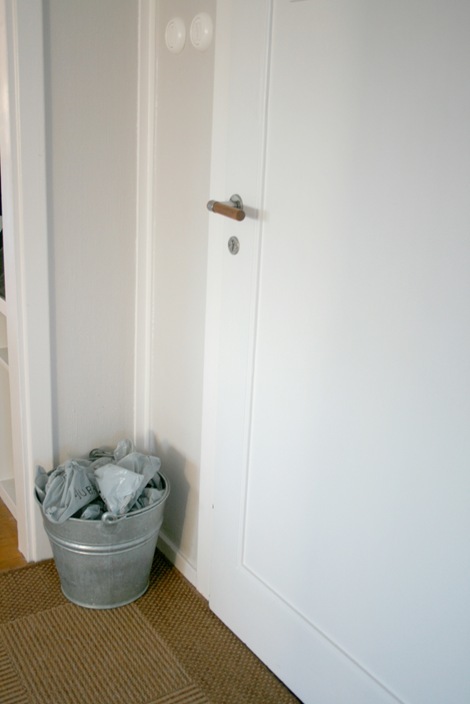 This wasn’t my idea but our realtor’s actually. He switched his regular container for shoe covers to our galvanized bucket which I thought was a nice touch. 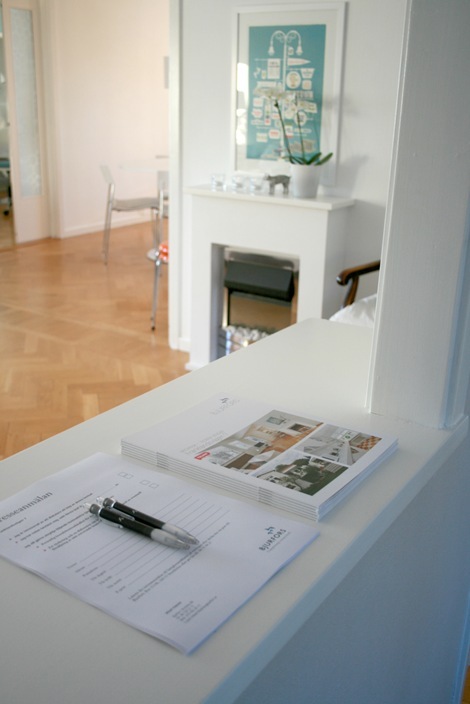 The booklets and interest sheets were laid out on the counter in the hallway towards the living room.

All laundry baskets and hampers received covers of clean towels. The ones in the laundry room to disguise the dirty laundry inside and this one in my closet … 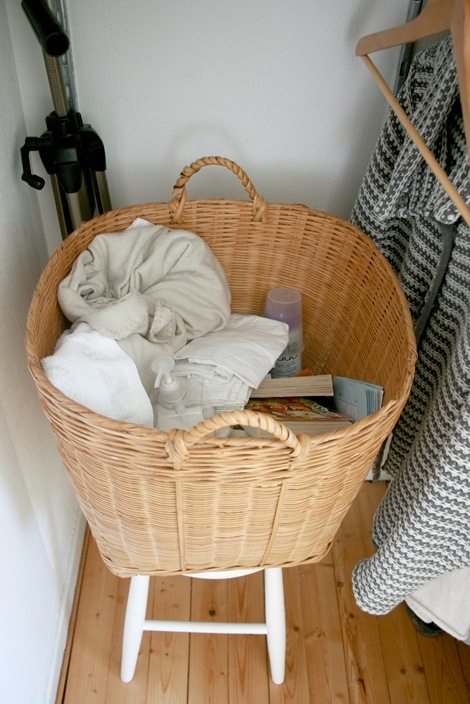 … to hide all those personal toiletries and every day items that you need but don’t want to show. I got the idea from Sherry and John who did this when they were showing their house. Like they said, people will open your cabinets and look inside but they won’t be likely to dive into your hamper. Wise words.

We also did stuff like hide away the kitty litter box, remove the cube stools from the window in the living room so people can look out properly, remove the dish rack & co, empty all trash cans, remove as much cat hair as possible with a lint roller just before leaving and fill the fruit bowl.

Our open houses and showings are a thing of the past now (will tell more next week!) but I know that some readers are on the move like we are so what are your best pre house showing tips for them? 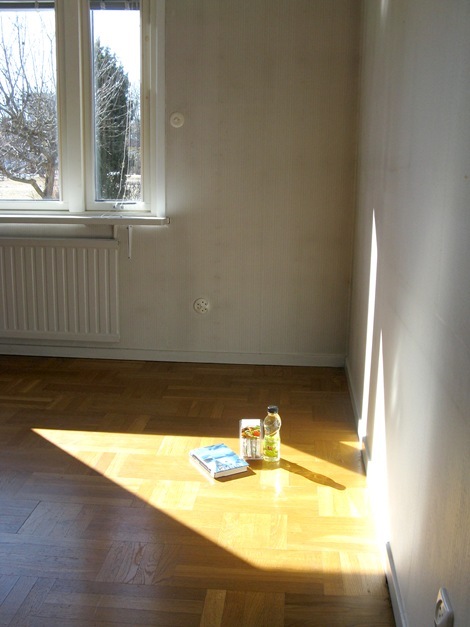 On Saturday our realtor had some requests for viewings of our house and since they were spread out from 10 am to 2.30 pm Wille and I decided to stay away for the entire day. Wille went to his friend Leo and I went to the new house. I brought lunch and the book I’m reading and found a sunny spot and enjoyed.

I really, really love our new house and can’t wait to move in and put our mark on it.