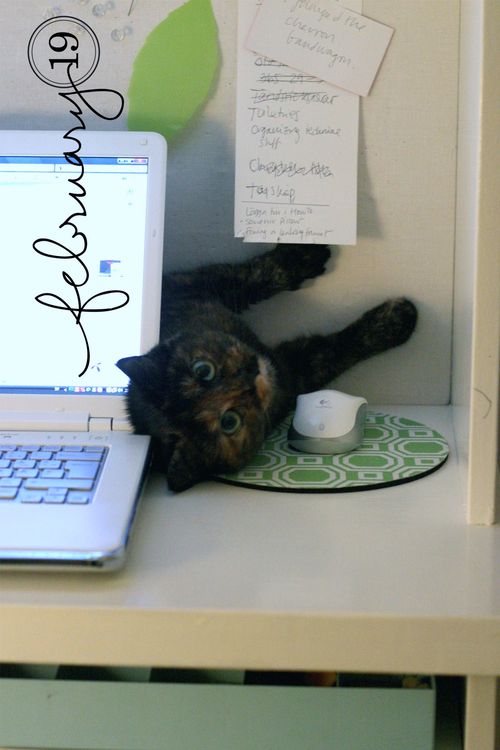 Not the best shot in terms of photography, it was really a get-your-camera-out-now-don't-fidget-with-settings-moment. Darling Mini :) 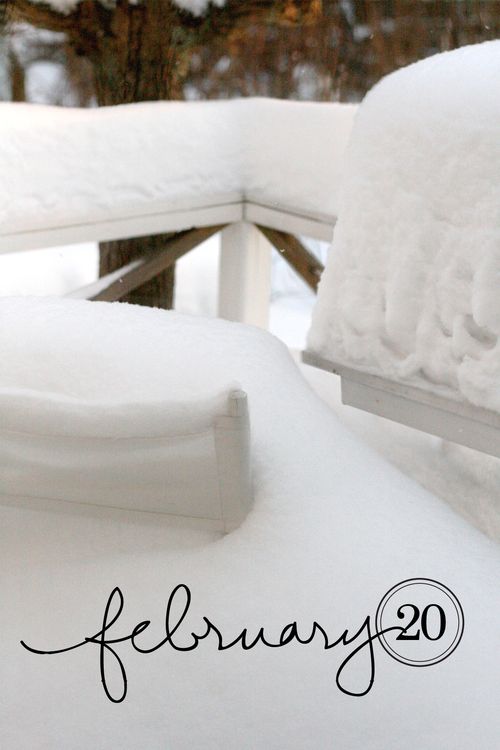 Remember these photos back on December 21st (on my Birthday actally)? We've had some more snow since then... 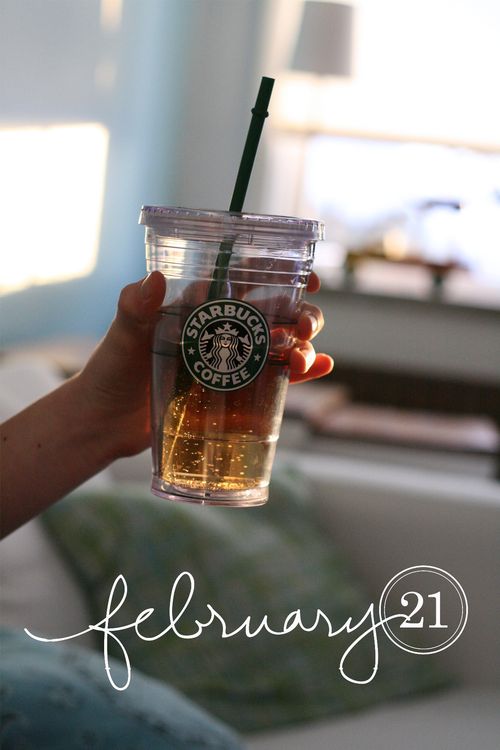 Sun! And Starbucks! Wille's a happy camper. Sara, a longtime reader and fellow Starbucks fan sent Wille this cool mug from the States. Wille is over the moon! Starbucks actually opened it's first coffee shop at the international airport here in Stockholm last week. You need a ticket abroad though because it's past security. 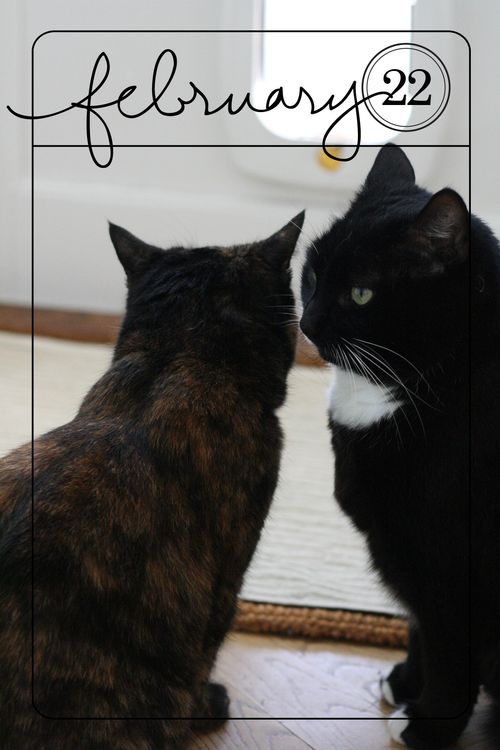 Tender moments between Mini and Bonus are rare, they are usually in disagreement about most things. I caught them getting along for several minutes on Monday though. That was the day I couldn't get to work due to the cold weather; -22 C/ -7.6F. 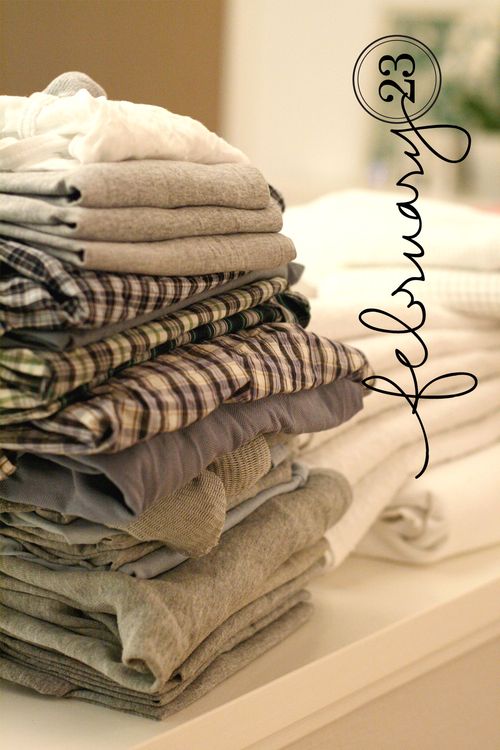 Laundry and more laundry. I've decided that Martin needs to help me with it more. I always end up in the basement at 10pm hanging and folding before going to bed. He says he'll do it from now on... 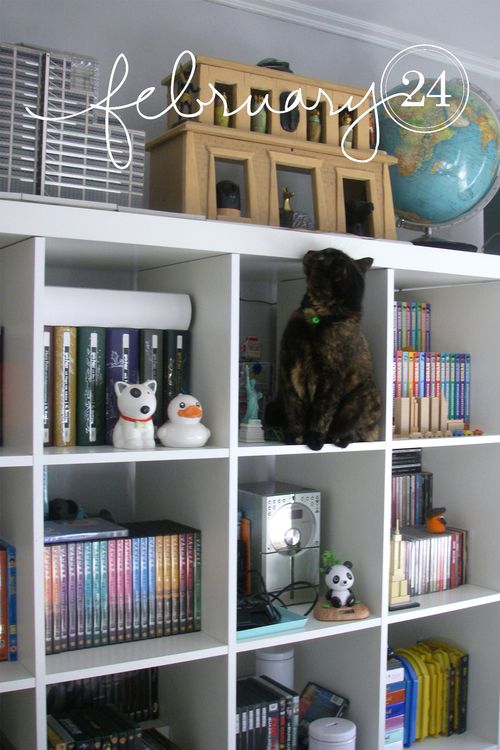 Mini like to explore. Martin caught her in Wille's bookcase and only just managed to catch the wooden skelton that was sitting on that shelf before it reached the floor. 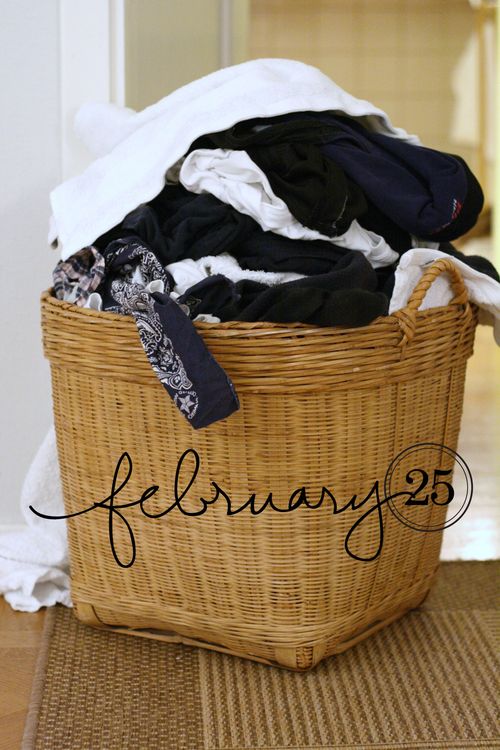 Not sure how the laundry thing is going because the hamper's usually not this full. It's been two days since I asked a certain someone to help me out.

Speaking of housekeeping, there were some really fun and useful comments to the hotel toiletries post the other day and also tipping came up. Do you tip?

Us Swedes are horrible tippers and I'm sure hotel staff abroad are not happy with us staying in their hotels. There's not a tipping culture over here. We're used to people getting decent pay I guess. Over here it's norm to tip at restaurants and in taxis but that's basically it. I also tip our hairdressers (who always look really surprised and say it's really not necessary, but I was brought up to) and when I'm abroad I do tip at hotels (always at the end of my stay and probably not enough) and whenever's the norm there. When in Rome, you know, but what's the deal where you are? 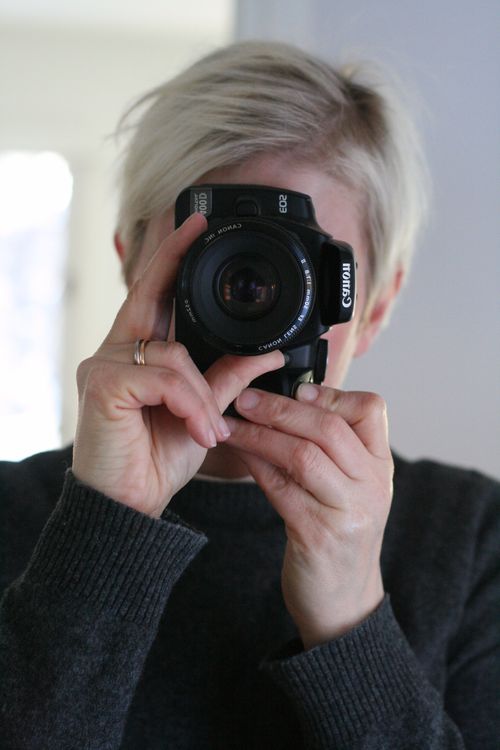 What you see there backwards is obviously me but also my camera. I've been getting a bunch of questions lately on photography and what camera and software etc I use when I blog so I though I'd show you.

My main camera is the Canon EOS 400D aka the Digital Rebel XTi. I've had it for 15 months now and it's my buddy.

I started out taking photos with an analog Canon T50 many years ago and even took a semester of photography classes after I left IKEA back in the late 80's. I never really got the hang of the technical stuff like aperture and shutter speed though so when I went digital I got point and shoots with some semi manual options. I quickly realized that with the cameras being digital the whole tech stuff got so much easier because you could see right away if you made a mess or succeeded in taking a decent photo so after a few years of pointing, shooting, and trial and error on semi manual mode I decided it was time for a DSLR. 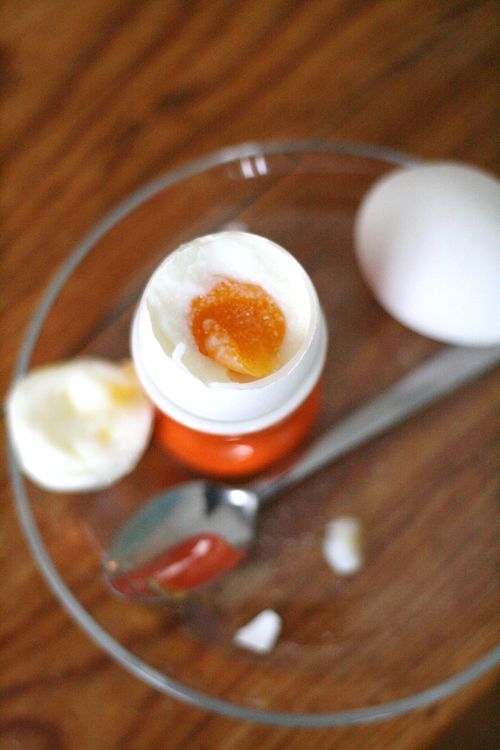 I usually use the Av setting which means I choose the aperture and the camera helps choose the shutter speed. I mainly shoot still life and occasionally portrait and I like being in charge of the depth of the photo which is what the AV setting lets me do.

The biggest difference I noticed when I got my Rebel was that I was suddenly able to shoot in much darker circumstances without the photos getting super grainy than with the point and shoots. Very handy being in darkness so many months over here.

My Rebel came with an 18-55mm kit lens which is perfect for starting out as there's some zoom which is both fun and useful. I still use this lens for most tutorials and all the photos on my blog and on Flickr from November 08 through October 09 were shot with that lens.

I got a tip in an online photography class I took to get a 50mm lens too which I did in October. It's the lens I use to shoot my 365 project. I love it! It allows me to shoot at even smaller depth which creates dreamier shots with much more focus on the subject than the background. 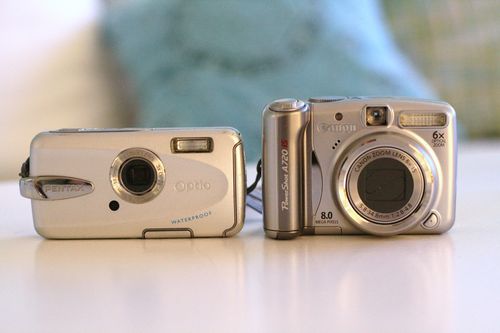 If you are looking for a simpler camera and are not yet ready for a DSLR I have two recommendations for you. One is the point and shoot I used for a year prior to buying the Rebel. It's again a Canon, for some reason that brand just works for me. The model I had was Canon Power Shot A720IS and I loved it! I still love it but it's been demoted (sorry!) to my "in the garage doing DIY" camera. If you want samples of the photos I took with it they are basically all the one's I started out with on Flickr from October 07 through Nov 08 and here on the blog too from the start.

The other camera in the shot above is Martin and Wille's Pentax Optio W30. The W stands for Waterproof and it's what they bring when they travel. It's been in the sea in Greece two years in a row, on the slopes of Zakopane, Poland and outside in the rain. Martin is VERY challenged when it comes to buttons on cameras and he strongly recommend this one for other non-techies who like to snorkel.


This pretty cool fish video was shot by Wille in Greece last summer in Siphnos with that very Pentax Optio W30.


So that was the hardware bit. Now to the soft.

I have to mention rule number one first. NEVER use the flash when taking photos! Wait for better light, get a tripod or lean against a wall or rest your elbows on a table but I repeat NEVER use a flash (unless of course you're a pro and know what you're doing). Flash photos are almost always flat and harsh looking.

So with that out of the way I'll just quickly tell you about what I do to the photos after I've uploaded them. I hardly ever crop my photos. I like to compose them right there in the view finder. Sometimes a shot gets wonky though and I need to align it by rotating it a few degrees and then of course I crop the now slanted photo. I use Photoshop CS for this.

I only fairly recently started using Photoshop. I took an on-line class and learned the basics so now I know how to lighten a photo and how to turn a color shot into black and white and do some simple editing with layers. I also use Photoshop for adding the overlays on my 365 project photos.

There are other much cheaper options to edit photos though such as Picnic via Flickr so you don't have to get Photoshop. There's also a simpler less expensive Photoshop version called Elements. 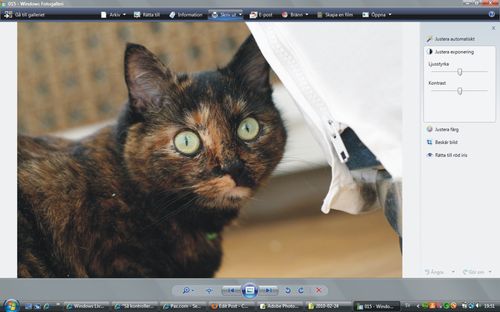 When I'm too lazy to open up Photoshop or want a quick fix in a hurry I simply open the photo in Windows Photo Gallery which came with my lap top and either just choose "automatic edit" which compensates for bad exposure etc with a single click. Windows Photo Gallery also has other options to edit photos which are super straightforward if the automatic click was too drastic (it sometimes turns the photos a bit "blue"). There's also a crop tool and a couple of other things you can do. Before I started using Photoshop it's what I relied on.

That's basically it. If you've made it this far down in this post I congratulate you. I had no intention for it to get this long. It just happened.

Oh, one more thing, use the view finder to look properly at what you are shooting. Take the background into consideration before pressing the button and remove clutter from the shot. It will make a world of difference if that cable isn't trailing on the floor or that garbage bag isn't siting behind your subject.

Ok. Now I will stop.

Ok, are you ready to confess?! What amenities if any do you bring back after a stay at a hotel? Do you clean out the place like Ross and Chandler or are you picky and only bring a single mini designer lotion home if available? 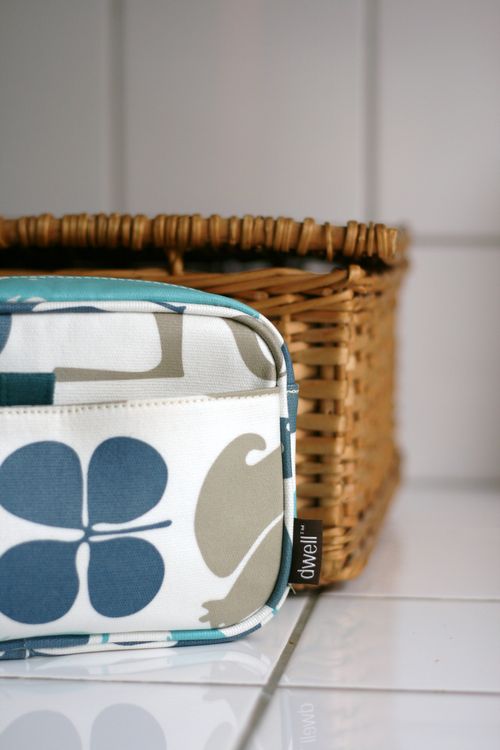 I'm kind of in between. I used to be greedier but after tossing out old lotions and unused mouth washes I started controlling myself. A little.

This was the amenities tray at the hotel in China back in October. Loads of goodies; loofah, bar soap, vanity kit, sanitary kit, bath salts, two combs, two dental kits, emery board, razor, sewing kit, two shower caps, shower gel, shampoo, conditioner and lotion. And if you stashed them in your bag there was a new set upon returning to the room later. Maybe they compensated for the lack of internet access?! I promise I didn't put this into a system but a few things did come with me back home. So this is the basket that's on one of the shelves in the bathroom. It holds extra razors, dental floss etc but also my stash of hotel tooth brushes... 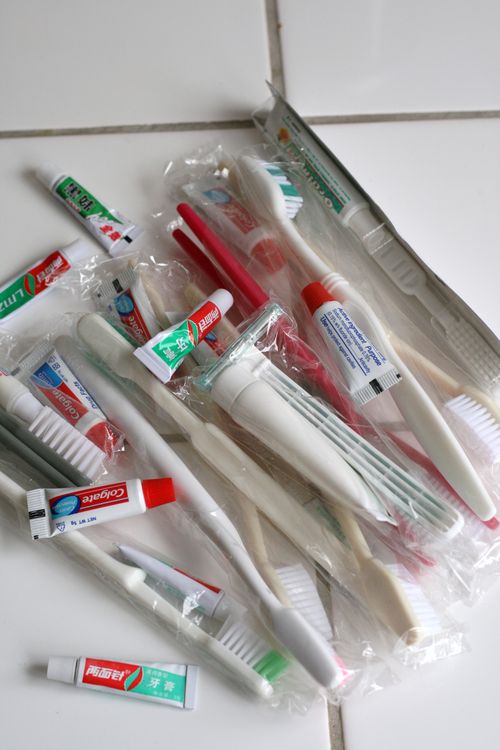 ... yup, guilty as charged. I completely clean hotel rooms of these kits. The reason being that these actually get used. Wille who uses an electric tooth brush at home takes a kit when going on trips and Martin who's allergic to rubber has problems finding tooth brushes he can hold. Did you know that virtually all tooth brushes have rubber grips and features nowadays?! EXCEPT for these cheapo hotel ones. 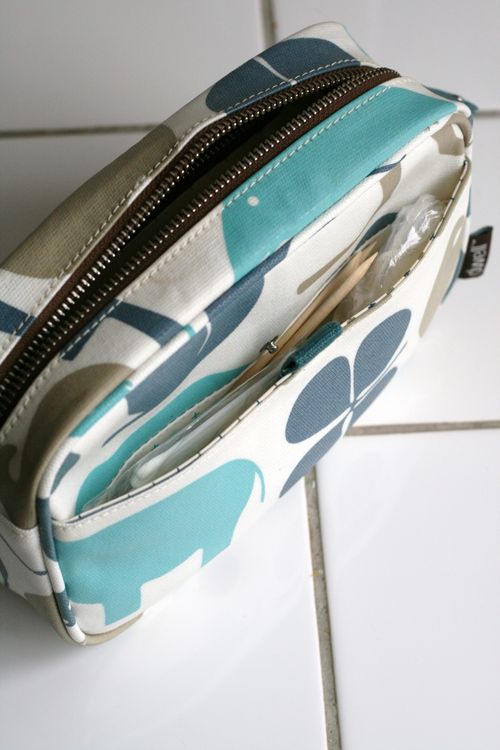 The side pocket of my cute Baby Dwell toiletry case holds part of rest of my hotel loot... 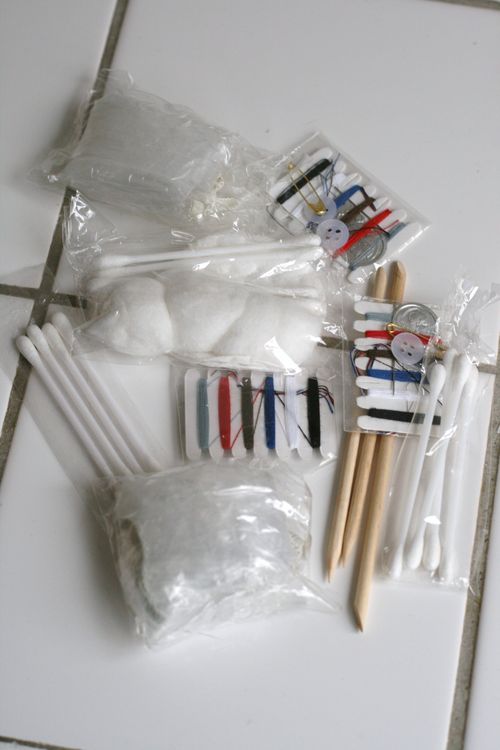 ... like these little vanity and sewing kits. Perfect for those hotel nights where the management isn't as generous as the five star China version. The shower caps are for my mom :).

Please remind me that I don't need any more sewing kits though. After I took these photos I found the rest of them (yes, very plural) in a drawer in the sewing nook... 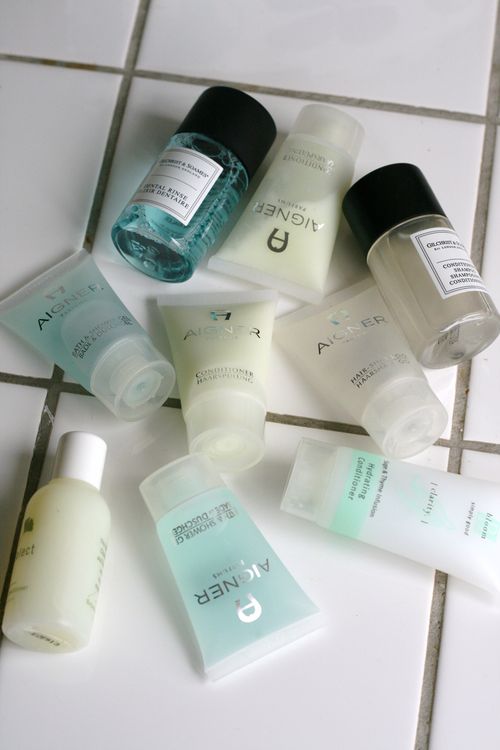 The main compartment of the toiletry case holds those little bottles that are so difficult to resist. I've realized that no one in this household wants to smell like the generic male so I make sure to sniff before pocketing. These sure passed the test. Lovely scents! I also take any small not-to-perfumey lotions that can go into my work bag. Loved getting mini versions of Vaseline Intensive Rescue Lotion at the hotel in King of Prussia in December!

So, please do confess!